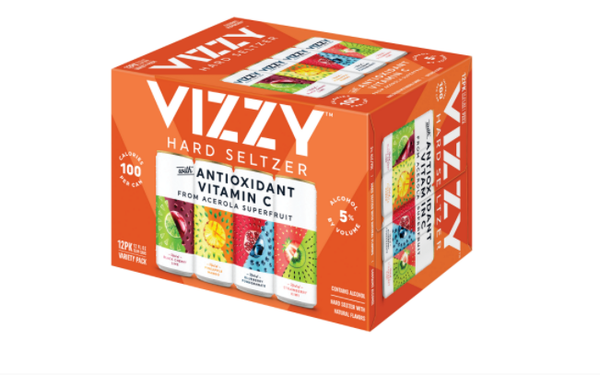 Molson Coors Beverage Company launched its hard seltzer Vizzy earlier this week, even though on-premise sales of alcoholic beverages are down to, at best, a weak trickle.

But spiked seltzer takeout sales are through the roof, so Vizzy may not have much of a problem getting attention against established brand leaders White Claw, Truly and a growing number of competitors.

Molson Coors thinks Vizzy adds a new wrinkle to the category because it is the only seltzer made with “antioxidant vitamin C from acerola superfruit” in all of its four flavors. That should appeal to health-conscious drinkers.  That superfruit is actually a Brazilian cherry packed with the vitamin.

Give Molson Coors credit for finding a differentiator. “The thing we have seen consistently with this category is that all of the big hard seltzers are following the same playbook: same flavors, low calorie count, low sugar,” said Elizabeth Hitch, director of hard seltzers for Molson Coors on the beverage company’s blog.  “When we created Vizzy, we knew we needed to come to the segment with a distinct point of difference that consumers actually care about, and antioxidant vitamin C consistently rose to the top.”

Hitch says the brand’s target customer base of 25- to 35-year-olds are looking for all those  ow calorie, low carb, sugar-free drinks, but they’re also looking for the “presence of positives.”

New six-second videos ads the company now shows on social media carry the words, “Another new hard seltzer?” and then  the answer: “Yeah, but we’ve got antioxidant Vitamin C.”

Another ad shows the letters A,B.C,D presented in the style of New York subway line graphics,  with the inscription, “When in doubt, always pick C.”

Vizzy arrives on the scene as Nielsen reports that hard seltzer’s phenomenal impact on the market is continuing. For the week of March 28, hard seltzer sales were up 327% compared to a year ago, which Nielsen said outpaced its growth rates prior to the COVID-19 crisis.

Trying hard to be different only goes so far. In February, an Austin beverage company that since last October has been marketing a hard seltzer called Brizzy asked for a preliminary injunction to stop Molson Coors from launching its sound-alike Vizzy.

A Texas federal judge on March 24 denied the request, ruiing that  “Plaintiff cannot realistically hope that by obtaining a mark based on and characterized dominantly by one word (‘fizzy’), it can prevent competitors from doing the same.” Brizzy’s owner, Future Proof Brands LLC, has also filed a copyright infringement suit against Molson Coors.