The last couple of weeks have brought a growing body of surveys and viewership data analyses confirming a boom in streaming viewing time since much of America began sheltering at home.

One of the latest examples is a report from smart-TV maker Vizio, based on data from its Inscape research and ad sales arms.

Between the week of March 9 – the one just preceding the initiation of national social distancing guidelines — and the week of April 6, the data show OTT viewers’ overall content viewing having risen 10%; OTT viewing minutes per user up 53%; and number of total viewing sessions on Vizio’s SmartCast TV platform up 77%. (Linear TV viewers’ overall viewing time was also up 10%.)

And while overall app usage on the platform is up 20%, use of ad-supported video-on-demand apps is up by fully 74%. Clearly, Netflix and Disney+ are by no means the only streamers seeing big lifts from this unprecedented upheaval in our lives.

At the same time, the most recent in a series of Advertiser Perception studies tracking advertising trends during the pandemic confirms that, while U.S. advertiser and agency executives report decreasing overall advertising spending, OTT/CTV is among the media platforms benefiting when new budget is added, or money is being reallocated.

While fewer report channeling more budget money into linear broadcast TV (25%), it will benefit most from budget reallocations (38% report reallocating to broadcast). And once again, OTT/CTV is on par with linear cable: 29% of respondents reporting reallocating funds to each of those platforms. In this case, digital video is a step behind, pegged to get more reallocated funds  by just 11% of marketing decision-makers. 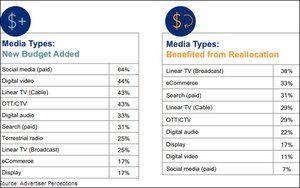 Meanwhile, a Viant survey of 500 marketing decision-makers at U.S. companies conducted just weeks prior to the outbreak’s onset, in January, was already confirming a growing role for CTV for this year, with between 13% and 14% reporting that the advent of big new streamers was resulting in more spending, designation of a specific budget, or increased testing for CTV.

And nearly a quarter indicated that the new streaming services would mean a reduction in spending on linear TV. 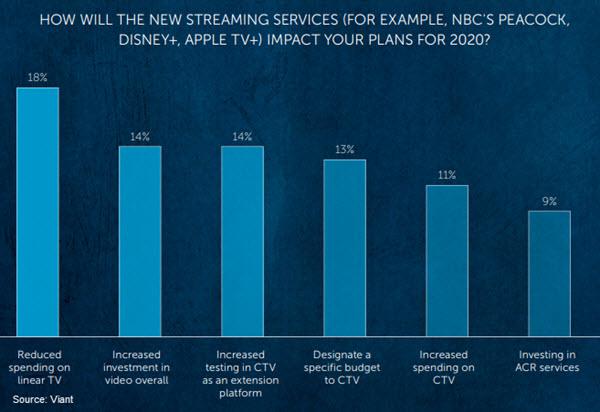 Further, streaming’s influence aside, fully 84% of respondents said their brands would spend less or the same on traditional linear TV in 2020 as in 2019. In Viant’s 2018 survey, just 57% indicated they would spend the same or less on linear versus the previous year.

One reason is clear: 59% said they believe traditional linear ad spend is less effective than five years ago (versus 41% saying the same in 2018).

Of course, thanks to traditional linear TV’s reach advantages, it remains a core buy despite broadcast’s declining audiences and cable’s ongoing loss of subscribers.

But the survey also confirms a growing role for another form of advanced TV: programmatic linear. Thanks to that platform’s ability to target based on Nielsen-based user-level demographics data or media criteria (show, daypart, network), 20% of marketers indicated that they were incorporating it in their 2020 campaign spending—and another 20% said they planned to do so in the future.