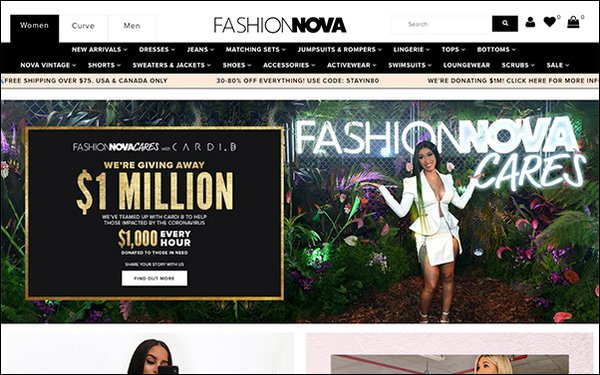 The Federal Trade Commission said Tuesday that online clothing retailer Fashion Nova will pay $9.3 million to settle allegations that it failed to ship merchandise as quickly as advertised, and that it offered gift cards instead of refunds when it couldn't send merchandise on time.

News of the prosecution, which comes as e-commerce has taken on new importance during the COVID-19 crisis, is seen as an attempt by the FTC to alert online retailers to the agency's long-standing rules regarding shipments to consumers.

The FTC alleged in its complaint that, for years, Fashion Nova's practices have violated the agency's longstanding “Mail Order Rule.” Among other mandates, that rule requires catalogue companies, mail-order sellers and online retailers to notify consumers of any shipping delays, and allow them to cancel orders for refunds in case of shipping postponements.

The agency adds that the $9.3 million settlement, which sets a new record, will be used to compensate consumers who received gift cards in lieu of refunds.

Advertising lawyer Jeff Greenbaum, a partner with Frankfurt Kurnit Klein & Selz, said it's likely not a coincidence that the FTC brought the case during a time of increased reliance on internet shopping.

“This is the FTC enforcement action that I have been waiting for for the last month,” he says. “I've been very concerned that online retailers have not been adequately prepared to deal with the challenges of complying with the mail order rule in an environment where there's been a massive uptick in online purchasing.”

He adds that the FTC often chooses to bring cases in order to send particular messages. The timing of the Fashion Nova settlement “suggests that the FTC is sending a big, loud warning to online retailers that they better comply with the 'mail order rule,'” he says.

FTC Commissioner Rohit Chopra suggested Tuesday that the agency's rules regarding shipping are especially important during the current crisis.

“Quarantines and lockdowns mean that we're buying even more online,” FTC Commissioner Rohit Chopra tweeted Tuesday “.@FashionNova, which built its business through celebrities and social media influencers, cheated its customers and competitors that played by the rules.”