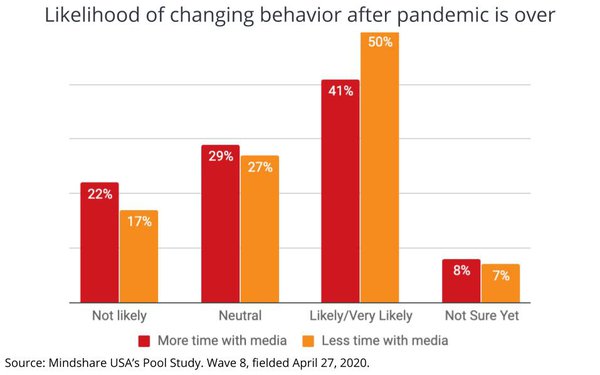 Two months into the COVID-19 pandemic more Americans say one of the behavioral change they plan to make after the crisis is over is to spend less time with media. That's one of the findings from the eighth weekly tracking study from Mindshare.

While it is self-reported and just a projection of their future intent, the finding could be significant for the advertising and media industry at least in terms of what it says about the sentiment Americans have about their overall media behavior pre- and post-pandemic.

Mindshare previously detected some media burnout, as well as some perceived active avoidance of media during the pandemic, during an earlier wave conducted three weeks ago. In that study, conducted April 6, Mindshare found 38% of Americans said they already were limiting the time they spend with media explicitly to avoid seeing news about the coronavirus.

Last week, Mindshare also found the number of Americans who perceive they have "run out" of media content had risen to 46%, though it did not publish similar findings in this week's report.

On a bright side for brand marketers, Mindshare also detected an uptick in the percentage of Americans who say they are aware of brands helping with the crisis. After plummeting to 31% last week, the percentage rebounded to 41% this week. 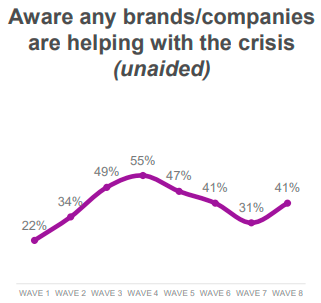