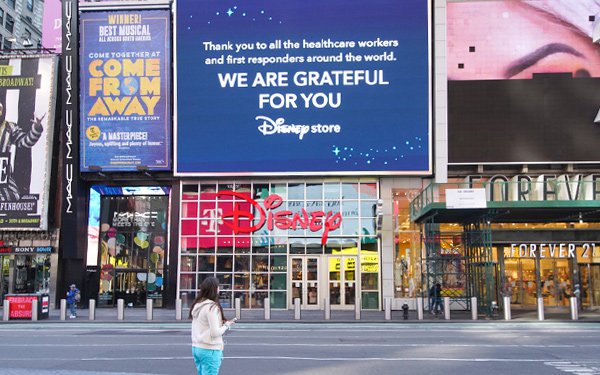 Walt Disney cancelled its dividend, had a 90% drop in net income, and had a “significant” decline in TV advertising in its first-quarter reporting period.

Although the company did not provide specific details, Christine McCarthy, senior executive vice president/chief financial officer of Walt Disney, said in an earnings call on Tuesday: “Obviously the COVID-19 pandemic has had a significant impact on our advertising sales... For us it is really due to the lack of live sporting events, and a pullback in advertising categories that are most impacted.”

But the end result was a downturn, with a “significant decline in ad sales.” She did not provide details, other than to say that ESPN witnessed a major drop due to the lack of live sports, with lesser declines at the ABC Television Network.

Disney faced other major financial setbacks in the period as a result of the closure of theme parks, movies that could not be shown in movie theaters due to closings across the U.S. in the last two months of March, and lower TV advertising results.

Net income from continuing operations dropped a massive 91% to $475 million from $5.4 billion in the first quarter of 2019. Free cash flow declined 30% to $1.9 billion. Somewhat bigger news for investors was the suspension of Disney's semi-annual dividend.

Disney's closely watched parks/experiences and products division had a major decline -- down 10% to $5.54 billion, largely a result of the last two weeks of the first quarter, when Disney had to close its theme parks.

Looking forward, Disney says it will re-open its Shanghai Disneyland on May 11, with many COVID-19 protections for guests and for its performers, as well as abiding by lower China-restricted daily attendance rules.

“We very much believe in the value of theatrical experience overall to launch blockbuster movies... but we also realize that because of changing or evolving consumer dynamics or because of certain situations like COVID, we may have to make changes to that overall strategy.” Chapek added: “We are going to evaluate our movies on a case-by-case situation.”

While many studios have rescheduled theatrical film openings to occur later in the year, others have begun to shift movies to home VOD from in-theater exhibition earlier than planned.

Major positive news continues with its Disney+ premium streaming service, launched late last year. As of May 4, it now has 54.5 million global subscribers, up from 50 million a month ago. Current levels would more than double that of its February 4 mark-- 26.5 million subscribers.

For the first quarter, Disney media networks witnessed higher revenue, up 28% to $7.3 billion -- due to the consolidation of Fox cable TV networks, specifically FX and National Geographic Channel. At the same time, there were lower results at ESPN, due to lower advertising revenues from the lack of live sports.

Broadcast revenues were up 49% to $2.8 billion as a result of higher program sales, and also due to acquisitions from 21st Century Fox.

Studio entertainment rose 18% to $2.5 billion, with net income down  8% to $466 million as a result of a decline in theatrical distribution from COVID-19-related theater closures. This was partially offset by Fox business film acquisitions.