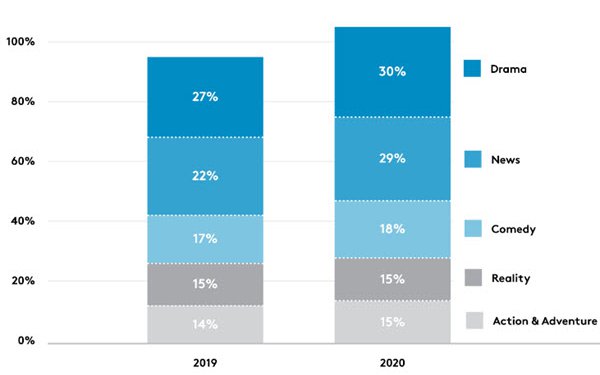 Sheltering at home during the coronavirus pandemic has caused a blurring of weekday and weekend viewing habits and levels —but no sign of a rush to escapism on the content front, according to Comcast.

During the past two weeks, Monday has become a bigger TV viewing day than Saturday, the media giant’s data show.

“What our customers are likely feeling in self-isolation — that all the days are blurring together and it’s hard to tell which day is which — is reflected in daily TV trends we observed,” the company reports in a blog post.

“Typically, customers watch far more programming on the weekend, and that is also when they tend to take a break from their DVRs and watch more on-demand content, including renting and purchasing movies. Since the start of COVID, these distinctions have blurred, with weekdays seeing viewing levels and trends akin to the weekend.”

Comcast confirms that people are now watching weekend-levels of TV every day and renting and purchasing more movies on weekdays.

Late-night television viewing is also up significantly — 40% — with the largest increases happening between 11 p.m. and 2 a.m. And after staying up later, people seem to be sleeping later in the morning, observes Comcast, based on a 6% decrease in viewing between 6 a.m. and 8 a.m.

The patterns also show weekday DVR usage has declined somewhat. While Comcast doesn’t speculate as to why, more flexibility in work schedules and sleeping hours would seem to be a plausible explanation.

Comcast also confirms a “massive” increase in news consumption: up 64% since the start of COVID-19, and hitting its peak during the week of March 30, when reported cases of the virus topped 1 million. News consumption has since leveled off, however, and COVID-related voice commands have declined by 30%.

Viewers are also defying the conventional wisdom that people tend to turn to lighter content during times of crisis. “Instead, they’re watching even heavier shows,” reports Comcast.

The patterns also point to viewers craving new programming, now that they’ve been able to “check off their TV bucket lists,” says Comcast.

DVR usage (particularly on weekdays) has been slowly decreasing, while video-on-demand usage has leapt by 50%, along with double-digit growth for discovery-related voice commands such as “what to watch” and “surprise me.”