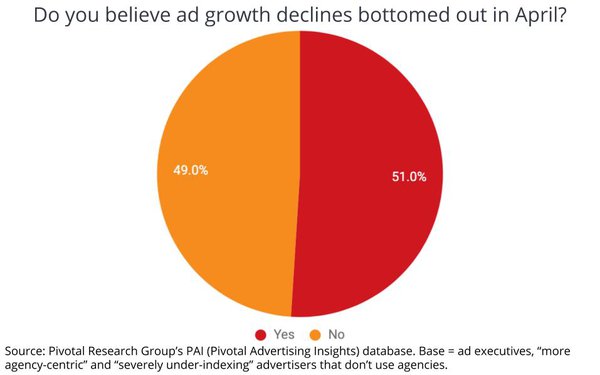 If there is a "bottom" to the rollback of ad spending during the COVID-19 pandemic, it probably hasn't come yet for about half of ad executives. That's the finding of a report published by equities research firm Pivotal Research Group, based on surveys it conducts with the ad industry.

Noting that its sample likely skews toward agency respondents and under-represents advertisers who don't work with agencies, Pivotal notes: "While we see reasons to believe that April is the bottom (51% of PAI respondents thought so), we don’t see signs of a sharp recovery."

Pivotal analyst Michael Levine, however, says both analysts and investors initially were too negative on the impact for media companies dependent on advertising, especially big digital platforms such as Facebook and Google that nonetheless turned in better-than-expected first quarter earnings results.

Pivotal's data seems to support findings of a recent survey of ad executives conducted by Advertiser Perceptions that indicated the ad industry is in fact nearing bottom, and that a full-blown ad recovery would likely begin in the third quarter of this year.

Meanwhile, the Pivotal data reveals another negative side of the crisis for ad agencies, with 50% reporting clients have made cuts to their agency fees during the pandemic.

About two-thirds indicated those cuts have been roughly "in line" with overall cuts in marketing budgets, while 15% each said it was greater or less than those cuts. 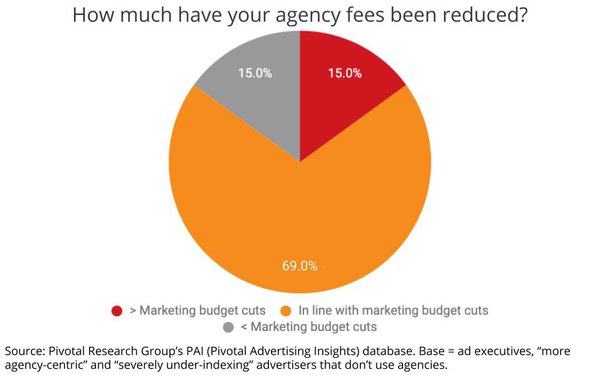