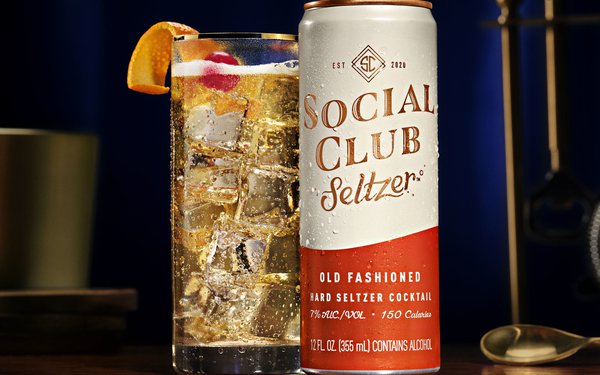 Anheuser-Busch InBev is adding another hard seltzer to its roster, this one seemingly angled at drinkers who might otherwise choose a liquor-based cocktail.

In Social Club, described as  “a sessionable option to  classic cocktails,"  the alcohol instead "comes from a cold-fermentation of sugar combined with purified water and cold-pressed fruits.” (A sessionable beer is one “low in alcohol which can be consumed in large quantities without making someone excessively intoxicated,” according to an online definition. )

And while it has only 150 calories per 12-ounce can, within the range of low-calorie seltzers, Social Club’’s 7% alcohol by content is significantly higher than most hard seltzers’. Most of them are 4%.

Before Social Club, AB’s Natural Light Hard Seltzer, at 6% ABV, was the strongest seltzer on the market. AB launched it last August. Its bargain-beer brand’s reputation for being cheap also makes it a favorite with college-aged students.

Social Club is beyond the typical tavern-goer,  it would appear.  The can’s  graphics and the website have a kind of art deco style. At the top of each can is a Social Club emblem. Surrounding it, Social Club alerts all that it was “Est. 2020.”

“Every refreshing sip is purposely made with the hardworking flavor of a classic cocktail. Made with intention for those seeking a sophisticated beverage to enjoy,” its website says. “Welcome to the Club,” it says a little later.

In announcing Social Club, Anheuser-Busch noted, “The hard seltzer category has grown substantially with an increase of over 300% this year alone. The Anheuser-Busch innovation team identified a gap for cocktail lovers in the hard seltzer market, with consumer research showing that 83% of cocktail drinkers are interested in a complex and sophisticated beverage.”

"With the growth of the hard seltzer industry comes consumers looking for new offerings that fit different occasions,” notes Lana Kouznetsov, vice president of  the tellingly titled Beyond Beer division at Anheuser-Busch, in a statement.

Except for Michelob Ultra and Bud Light, most of the beermaker’s main brands are languishing, as are established brands made by other brewers.

There are plenty of cocktails-in-a-can options out there, but few of them have the promotional or distribution clout of Anheuser-Busch, the world’s largest beer maker.