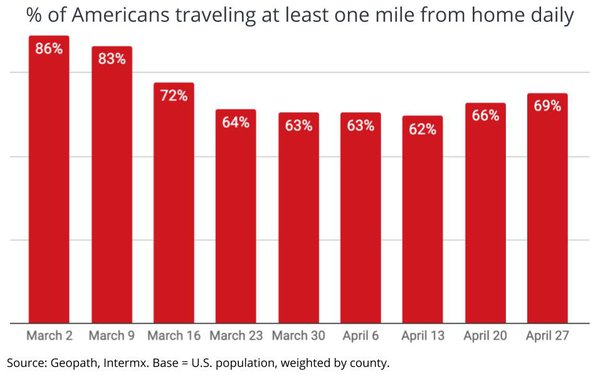 Some more revealing data from the out-of-home industry shows Americans are slowly regaining their mobility after months of staying at home.

This unique data visualization from Geopath and Intermx shows the percentage of Americans traveling one mile or more from their homes on an average day.

It was averaging well in the 80%-plus range at the start of U.S. restrictions and bottomed out April 13 at 62%, but has since inched up to 29% for the week of April 27, the most recent available in the analysis.

A Geopath spokesperson said the 80%-plus range appears to be a relatively normal percentage, indicating that nearly 20% of Americans ordinarily do not travel more than a mile from their homes during an average day.