Can You Reject An Ad AND Uphold Free Speech?

This case is important because it deals with advertising contracts and political pressure on media publishers.

In 2019, candidate Ellen Lee Zhou and the Asian American Freedom Political Action Committee entered into contracts with OUTFRONT Media and Clear Channel Outdoor to post billboards attacking Mayor London Breed (Zhou ran against the incumbent mayor, who was re-elected with 70 percent+ of the vote in November).

The anti-Mayor Breed billboards were removed after they were criticized as racist, misogynistic, and sexist. Zhou, the challenger candidate, alleged breach of contract.

The judge rejected Zhou’s claim, noting (and quoting) the unambiguous advertising agreement: “Clear Channel, at its sole discretion, may reject or remove any advertising material, art or copy, submitted by Customer for any reason or no reason at any time during the term of this Contract.”

The media companies acted, said the plaintiffs, to secure the goodwill of government that regulates billboards.

Mayor Breed said the billboards were “hurtful” and had no place in San Francisco. One billboard depicted the mayor in a red strapless dress, sitting with legs up, holding a cigar and cash. 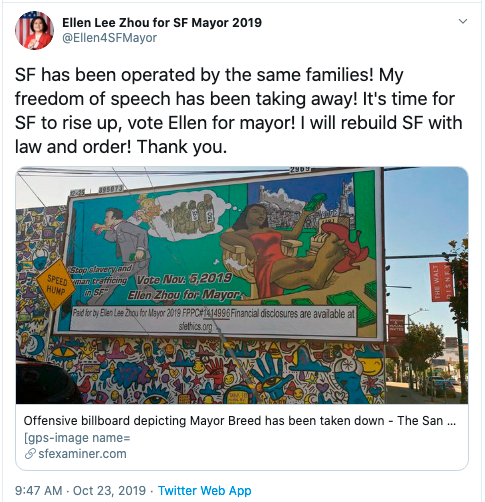 The judge said the mayor’s criticism of the billboards did not amount to government decisions to suppress speech: “No one threatened legal action or any negative ramifications to encourage removal of the billboards.”

California has an anti-SLAPP law, intended to discourage “strategic lawsuits against public participation.” Citing that law, the judge ordered the plaintiffs to pay Mayor Breed $22,200 in attorney fees.