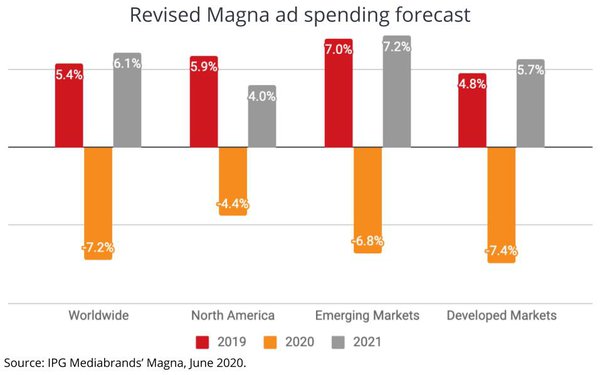 The global ad economy will contract 7.2% this year -- the worst reduction in worldwide ad spending in recent memory -- according to the latest estimates from IPG Mediabrands Magna unit.

The new estimates indicate the U.S. ad economy will shrink 4.4% and will rebound 4.0% next year.

Over its past three forecasts, Magna has revised the U.S. ad growth downward by 10 percentage points from a growth of 6.6% in its December 2019 forecast, to minus 2.8% in March, just as the COVID-19 pandemic was beginning to impact the U.S. economy -- and now down to 4.4% this month.

Others have predicted even more dire declines for the U.S. and global ad economy this year, but Magna -- or some variant of IPG's forecasting unit -- has been the gold standard for ad forecasting since the 1940s.

“Beyond the short-term V-shaped recession/recovery impact on the economy and the advertising market, the COVID-19 crisis will have global and long-term effects on society, business models, consumption habits, mobility and media usage," states Vincent LeTang, executive vice president of global market intelligence at Magna, and the author of the forecast report.

He adds that all of these factors indicate a "more subdued economic" expansion, as well as ad spending, through 2024.
To put this in perspective, LeTang estimates that total global ad volume in 2021 has been reduced by nearly $100 billion, from $745 billion in Magna's original long-term planning to just $647 billion currently. 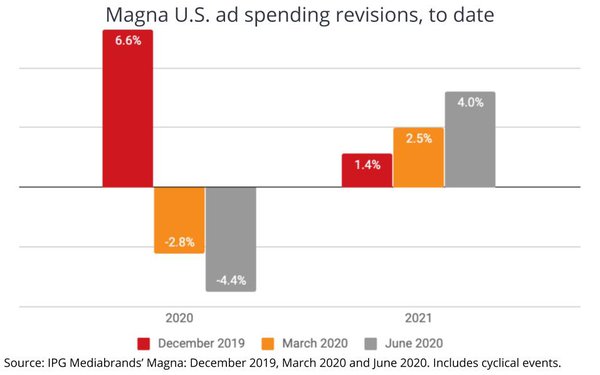