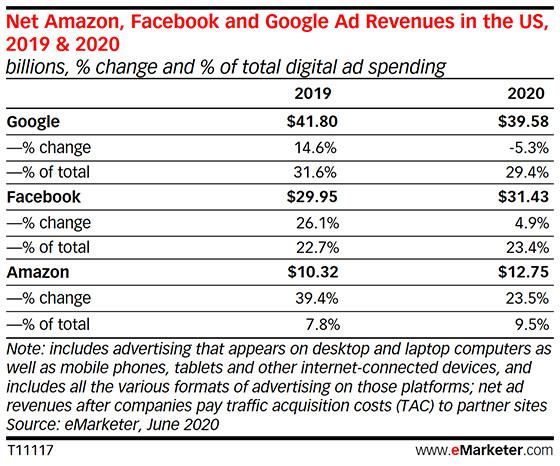 The downward estimate is the first since the analyst firm began covering the company in the U.S. in 2008 and globally in 2010.

The total U.S. digital ad market should grow 1.7% to $134.66 billion in 2020, but revenue distribution will differ compared with prior years.

Its share of the search ad market is expected to decline from 61.3% to 58.5% year-over-year, as search advertising on Amazon grows. Nicole Perrin, eMarketer principal analyst at Insider Intelligence, notes Amazon’s search market share is not affected by the declines in travel, unlike Google.

Facebook and Amazon will continue to grow but at a slower rate compared with earlier expectations. Along with Google, the three companies will increase revenue by $1.69 billion, but the distribution of funds will differ.

Despite declines to both forecasts, Facebook and Amazon will increase their net U.S. ad revenue this year, while the total digital ad market increases by only 1.7%.