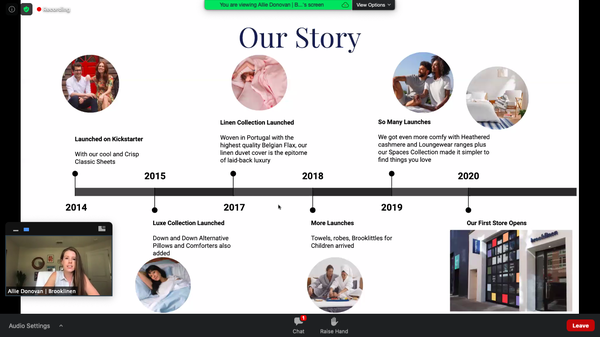 Testing and learning, trial and error, and taking small steps can add up to increased clicks and conversions -- and did for Brooklinen, which sells sheets, towels, and robes. As Allie Donovan, the brand's director of email and retention (inset), told our Email Insider Summit on Thursday, it all comes down to personalization.

Find the right message, and target consumers based on what they're looking at on your website, she said. Show them ways they can bundle merchandise and save.

Brooklinen created one email with three versions that it sent to people who looked at bedding, towels, and comforters and pillows, resulting in a 10% lift in conversions. "There's no magic, no easy way to figure this out apart from testing and learning," said Donovan. Personalized recommendations led to a 30% increase in clicks.

"Use the data you have," she said, pointing to a test Brooklinen did involving use of the customers' first names, resulting in a 15% lift in clicks. "It wears pretty fast, but it's a great place to start."

Another example she noted was the brand's birthday sale, when it celebrated customer milestones like how many nights one had a great sleep on their sheets. It saw four times more engagement and had a "huge impact on sales," she said, but did not give details.

Donovan suggested designing tests in short sprints: Balance simple subject line tests with more complex content and cadence testing. Some test will run for longer than one sprint, but check results on every sprint. Share knowledge in the team and between flows and blast campaigns.

Brooklinen has spent most of this year (if you can call it that, COVID-wise, as she said) sending fewer blasts and more triggered sends, with a 90% increase in engagements.

Triggers can be anything from abandoned carts to birthdays or "any signal that you're interested or disengaging with us." This resulted in 12 times more revenue from each triggered email sent versus each blast.