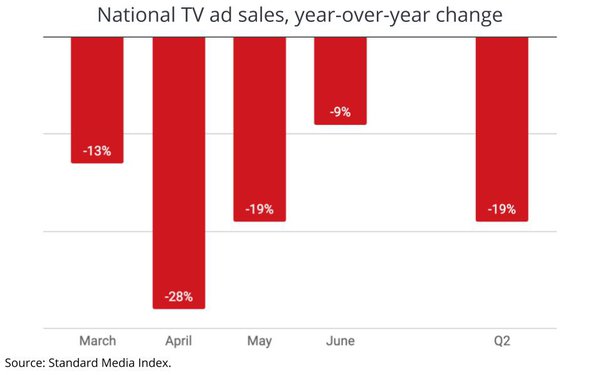 National TV advertising in June declined 9% to $3.2 billion -- a much smaller decline than the two previous months, according to Standard Media Index.

In April, in the thick of the COVID-19 pandemic downturn, there was a massive loss of 28%, followed by a 19% decline in May. Overall, the second quarter witnessed a 19% decline in the March to June period.

The primary reason for the decline in June was the lack of sports TV content, which led to a 60% drop in ad spending. During this month, there were no NBA Finals, NHL’s Stanley Cup Finals and or regular-season Major League Baseball games.

Sports that did make a comeback in the month of June included PGA golf, soccer, NASCAR, and horse racing, including the Belmont Stakes.

On the plus side, the company there was 2% higher advertising spending in TV news content, due to high interest in the COVID-19 pandemic and economic downturn.

SMI says networks aired the lowest amount of original shows in over a decade, saving them for the start of the 2020-21 season this September.

Looking company-wide, Walt Disney (with the NBA Finals delayed) sank 36% in national TV revenues for the month. Fox was 17% lower, and NBCUniversal lost 10%.

For the second quarter overall, ViacomCBS ended with the biggest national TV ad share of 19%, followed closely by NBCUniversal with 18%. Disney's ad share came in at 15%, followed by Discovery with 12%; WarnerMedia at 10%; Fox with 7%; A+E Networks at 5%; and Univision with 3%.

Since the beginning of the pandemic in March, major media companies have been hit hard overall, with declines of 20% and higher. In the second quarter, Disney was down 31%, while WarnerMedia declined 26%. ViacomCBS was 22% lower, while NBCUniversal lost 21%. Networks that had smaller losses included Discovery with 15%; Univision at 8%; Fox with 5%; and A+E at 3%.

The biggest individual network loser was ABC, due to the loss of the NBA Finals -- down 51%. Fox lost 39%, while NBC lost 11%. CBS saw an increase of 12%, and was first in advertising revenue for June.

SMI uses actual paid prices on commercial time, and combines it with occurrence data from Nielsen Ad Intel, to model 100% of the U.S. TV marketplace. It covers around 130 national TV networks.