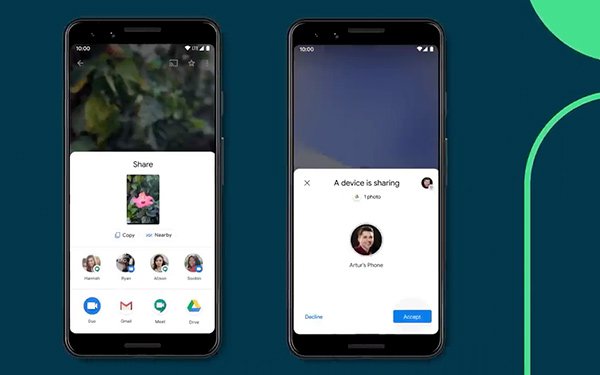 Google officially began rolling out a tool today called Nearby Share to select Pixel and Samsung phones. The idea is to bring the tool to other Android devices in the future.

It is similar to Apple AirDrop, which is mostly used to share photos and contact information and has been a basic feature on Apple's iPhone for years.

“Seriously,” a colleague wrote in an email to Search & Performance Marketing Daily when learning of the feature, “This is AirDrop. I thought Android was so advanced.”

Every day he takes pictures of his screen to publish the art in newsletters, hit AirDrop and wait for it to arrive on his laptop. Three years ago on a vacation to Colombia, he shot a cool photo of two tourists taking a selfie with the view behind them. They had iPhones. I showed them how to let me AirDrop the photo I took to them instantly.

Several years later,  Google releases what Apple has offered for years. Nearby Share shows users a list of devices nearby. Once the device is selected, the recipient will receive an alert to accept or decline the file. The tool picks the correct protocol -- Bluetooth, Bluetooth Low Energy, WebRTC or peer-to-peer WiFi to transfer the file.

Google says it is based on adjustable privacy standards from the phone’s Quick Settings at any time.

The sender can be “hidden,” visible to “some contacts” or visible to “all contacts.” The idea is to never receive files that are not requested or expected.

It's part of a plan to allow devices users to use the phone to find and interact with people close by. Remember the increase in searches for locations nearby such as "coffee shops nearby."

Google says that with this new tool, friends can "do things like play games or work together in apps that work with Nearby."