Lexus Finds Silver Linings In Pivots To Accommodate A Pandemic 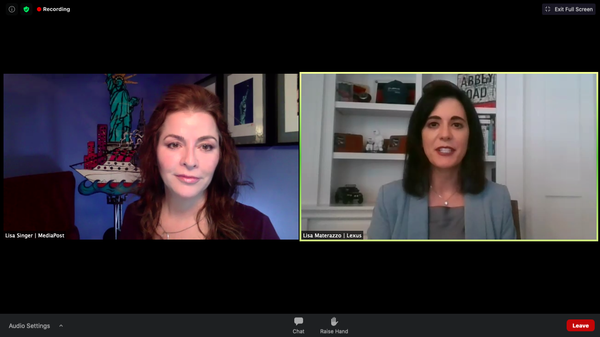 At every turn, with each postponement or cancellation, Lexus regrouped, pivoted and came up with new initiatives that turned into silver linings. That's what Lisa Materazzo, vice president of Lexus Marketing, happily reported at Tuesday's Marketing: Automotive conference on Zoom.

Motor sports, a passion point of Materazzo's and an area the luxury brand has been heavily involved with, eventually got back to actual racing, although they don't look like they did pre-COVID. "We're trying to stay as true as possible to the on-track experience. Normally, we bring the drivers into the fan engagement area. We did do a virtual driver appearance, figuring our way through it and delivering a special experience to those who are watching."

Lexus had planned to debut its new Lexus IS at the New York Auto Show, which was canceled. "We had to pivot, do what we had to do to get in front of the audience." So the company did the world premiere online and it was able to include many more people. "We are very happy with how it was executed," she said.

It has been a partner with the Food & Wine Classic in Aspen, Colorado, for 15 years. After that was canceled, Lexus was able to work with the event organizers and Food & Wine magazine to be part of transitioning that event to a virtual environment. "We made it work," said Materazzo. "We were able to lean into the charitable component and make it as engaging virtual as it would be in person.

"No one single strategy has worked across all initiatives. We take them one by one."

She said the key to this success throughout the pandemic has been communication. "Marketing is changing quickly," she noted. "There's no such thing as over-communicating."