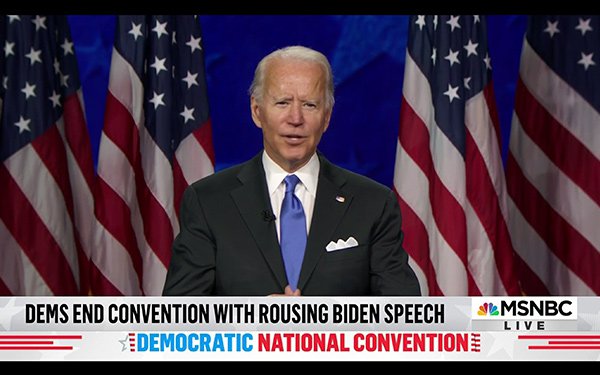 On the final night of its four-night event, the Democratic National Convention witnessed another uptick in TV viewing of 8% to 24.6 million viewers versus the previous night.

This was down 17% from the same night four years ago, when Hillary Clinton accepted the Democratic nomination to run for President.

For this year’s entire four-day event, MSNBC was the top network with a Nielsen-measured 4.8 million, looking at its average-minute-live program-plus-same day viewing metric, followed by CNN with 4.1 million, Fox News Channel at 3.5 million; ABC News with 2.6 million; and CBS News at 2.0 million.

MSNBC says this was its most-viewed week in prime time since its launch in 1996.

Looking at paid TV advertising running around the entire event, Rocket Mortgage: "Rocket Can: Queen" led with 27.5 million impressions, according to iSpot.tv. After this came Uber’s "Wear a Mask. Protect Each Other" (25.8 million); Rocket Mortgage: "Rocket Can: Together" (25.8 million); Searchlight Pictures: "The Personal History of David Copperfield" (24.7 million); and Safelite Auto Glass: "Auto Glass Damage" (23.7 million)

Also of note was the 24.7 million impressions WarnerMedia’s HBO/HBO Max got via non-paid TV promos for “Lovecraft Country,” with much of it running on WarnerMedia linear ad-supported TV networks: CNN and TNT.