Rethinking Relevance, Messaging And Context Beyond The Crisis 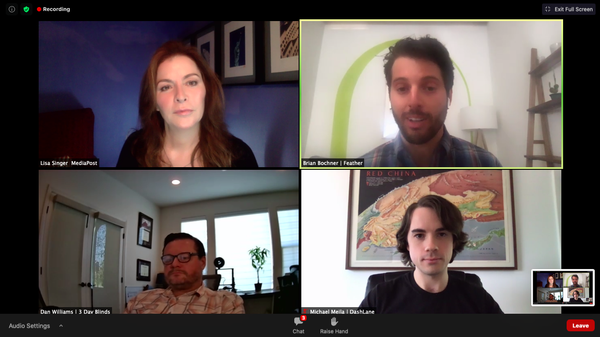 How do you plan when media, consumer patterns, the economy itself are in flux? How are brands and media buyers rethinking their digital campaigns through 2020 and into 2021? What is the new normal?

We set out to find the answers at our Data & Programmatic Insider Summit on Tuesday, where Lisa Singer, Event Editorial Manager at MediaPost (top left), moderated a panel discussion.

Brian Bochner, Senior Manager, Performance & Growth Marketing at Feather (top right), a home furniture rental company for city dwellers, said the company had been gearing up for a big media push when COVID hit. Stunned but unbroken, the company watched as workers from home increased orders by 400% from March through April.

While Feather was heavily into digital with a couple of pop-ups, Bochner said it is looking instead to get into augmented reality or a 3D version of its product offering. "We're planning to launch more higher-touch digital activations and extend them into our media planning," he said.

Feather doubled down on its partnership with the U.S. Postal Service and its Miami Move to get change-of-address data in order to offer discounts in exchange for email addresses. It is now onboarding four or five new partnerships every month, which is accounting for 15% to 20% of volume. "We are working to be smarter and to seek active partnerships from data and revenue-share models."

B2C password manager Dashlane was coming off a Super Bowl ad high with ads in every medium but direct mail. When COVID hit, said  Michael Melia, Media Director at Dashlane (bottom right), they turned everything off, reshaping the rest of the year and focusing on a niche audience and niche channels. "We moved a lot to digital," he said, targeting a higher qualified audience who would download the app and purchase the product. The scale of Dashlane's campaign shrunk and, working with "a great agency," it was very agile in their use of out of home and TV.

Although Facebook is one of its best channels, Melia said Dashlane joined the July boycott. Still after one month, they saw how badly it impacted their sales. So returned DashLane returned to Facebook. "We were handicapping ourselves. That's just the ruthless nature of the digital world we live in."

A new brand campaign will be two parts, one focusing on data breach responses and the other on addressable TV that t will target only 1 million households for four weeks to measure the impact on Google search.

Over at 3 Day Blinds, "our sales went to zero dollars. There's a number for ya," said CRO Dan Williams (bottom left). COVID meant they couldn't get inside people's homes. Even if they could, manufacturing was down in Mexico. "We went from having the best Q1 ever," he said. Their immediate media strategy was to shut everything down and get out of, or renegotiate, contracts. "We were scrambling to save money," he said.

Once manufacturing started back up and they were able to go inside homes, 3 Day Blinds restarted media -- and found a wave of people "tired of looking at the same things for months." So the strategy went from off to all back on.

"I've never seen anything like this in the home improvement space," said Williams. "It's out of control. We are on a hiring blitz. There's too much demand." The company is tracking analytics daily and making adjustments on digital media. Looking ahead, it is building out new creative, including a suite of creative for YouTube. "We're getting to a lot of things that have been on the list for a long time from a marketing perspective, things we probably should have focused on before."