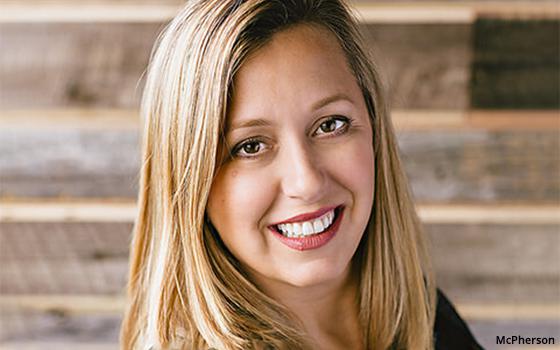 Dee Anna McPherson, CMO at Invoca, grew up in a very small Indiana town. When I heard this it immediately took me to Tom Petty’s famous song “Mary Jane’s Last Dance” where he sings about a small-town girl with a “mama who never was around.”

That couldn't be further from McPherson's story. She came from a close family where most people stayed local and worked in the town’s steel mill, and very few went on to college.

Early on, McPherson wanted to work as a physical therapist, but her aspirations changed when she entered high school and discovered a passion for journalism. She attended Purdue University with a major in journalism and a minor in political science.

“Having grown up in a tiny town, I had never traveled,” she said. “I really wanted to get out there and see the world.”

At the time, journalism was about newspapers. Her college advisor said she would need to get her start in a very small town and work her way up to a bigger city. That advice didn’t sit well with McPherson, so she changed her career path to communications and went straight into working in public relations.

Despite the COVID-19 pandemic, McPherson said Invoca will see double-digit growth this year. She has spent the last couple of months laying the foundation for 2021 with the announcement of new products coming in October at the company’s summit.

Inside Performance:  How did you make the transition to marketing?

Dee Anna McPherson:  I had a long career in public relations and worked mostly for agencies, but also worked in-house at a variety of companies. At my last agency job I was a partner at Horn Group. It has since been acquired. Then I went through the 2008 downturn.

Typically, the agency budget is the first to be cut. I had a toddler, so I took a year off. Then a long-term client -- Emergent Capital, a VC firm -- reached out to ask if I would help out a portfolio company getting ready to announce their A round of funding. They didn’t have anyone in-house to help. So I started consulting with Yammer and loved it.

IP:  What’s the best piece of advice you ever received and from whom?

The biggest career moves I made were risky bets. I started in Chicago and moved to New York. I didn’t know anyone in New York and had no savings. I moved then to Dallas for a big promotion, a general management role. I was 27 at the time. Then I thought since I’m in tech I should be in Silicon Valley, so I moved again and made a big leap from PR to marketing.

I always wanted to learn from the opportunity and gain experience. The advice came from my brother.

IP:  What attracted you to Invoca?

McPherson: Gregg Johnson, the CEO, and I competed against each other in two prior roles. I really wanted to meet him. Once I heard him lay out the vision for the company, I saw the opportunity.

As a marketer you can’t underestimate the power of the consumer conversation. … Today we’ve been focused on helping marketers understand conversational analytics to improve marketing campaigns, but as you can imagine, it can be applied in many other ways.

IP:  You began your career at Invoca during a pandemic, so what are your plans for the year?

McPherson:  Yes, it’s been an interesting time. I have yet to meet many of my co-workers in person. My immediate priority was helping everyone to adjust to market conditions. We will be making major announcements at the annual summit at the end of October. This year it’s online.

IP:  If you have time, what book are you reading now?

McPherson:  So You Want to Talk About Race by Ijeoma Oluo. It relates to everyone as a human and as a leader of an organization we have a responsibility to help lead through this interesting time. It also can become a very positive experience leading to positive change.

To change a habit, there's a lot of research that says you need 21 days, so the company is in the middle of a 21-day challenge. Everyone in the company signed up for this challenge.

Each day, employees who signed up must do something that helps them become anti-racist. That might mean reading something or taking different actions.

IP:  How does someone identify their behavior as racist to change the tendencies?

For example, there are terms in business we use in email marketing such as black list or white list. Now we use allowed and blocked. You don't think of them as having an impact, but they do. Internally, we've identified these terms and changed them.

In another example, sales and marketing automation is often referred to as master and slave. Now we use primary and secondary.