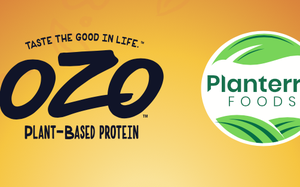 Ever heard the term “plant-based”?

If not, step out of the cave or else you’ll miss the revolution—at least according to a recent study cited by Innova Market Insights.

Plant-based food and beverages are not just a trend anymore, but are "definitely influencing almost every part of the food and beverage industry,” Tom Vierhile, vice president of strategic insights North America at Innova Market Insights, said in a recent presentation.

He described plant-based eating as “moving from trend to food revolution status” based on consumer surveys in Brazil, China, France, Germany, India, Indonesia, Mexico, Spain, the United Kingdom and the United States. The total respondent base was approximately 10,000.

Of particular interest was what the survey found about how people view plant-based dairy and meat alternatives—along with what constitutes “clean label” products.

First off, health concerns and taste drive trial and consumption of dairy and meat alternatives far more than people seeking vegan or vegetarian offerings. “The primary driver here is that consumers perceive these products to be healthier,” Vierhile noted.

So what did respondents consider “clean-label” to mean?

Thirty percent said it means products with no additives or preservatives, followed by no artificial colors (24%) and a claim of being “organic” (23%).

Also interesting are perceptions about the number and nature of ingredients found in beverages and food.

“I think the takeaway here is that consumers are spending more time looking at ingredient lists, but are not familiar with many common ingredients in products that are not typical pantry type ingredients,” Vierhile tells Marketing Daily. “In the absence of knowing what these ingredients are—like carrageenan, for instance—they assume they are artificial.”

Ingredient simplicity is a particularly lofty goal for categories like sports nutrition drinks, according to Vierhile. It also extends into plant-based meat alternatives and is the subject of ongoing brand jousting.

Lightlife Foods called out competitors Beyond Meat and Impossible Foods for their ingredients in August via ads in major national and regional newspapers, as previously reported.

The ads cited Lightlife’s plant-based burger as having just 11 ingredients — down from 14 since a recent reformulation, and compared to almost twice that amount found in similar products from Beyond and Impossible.

Impossible responded by citing “false claims” about its ingredients. “All they can do is raise loony, bogus issues to try to sow uncertainty and doubt,” the company said of Lightlife.

Beyond issued this statement: “If Lightlife took the time to read through our ingredients, they would see that our food is made from simple, plant-based ingredients.”

Having been sold by Campbell Soup Co. just over a year ago, Bolthouse Farms just introduced plant-based protein keto beverages and plant-based refrigerated dressings—with more such launches planned for this fall.

Asked about what some might consider internecine, competitive squabbling, Bolthouse vice president of marketing A.J. Bernstein tells Marketing Daily: “While I can’t provide comment on what other companies are doing, I can say that we believe that communications from Bolthouse Farms and other plant-based companies only helps to raise awareness of plant-based options in the market.”

Not to be left out, Planterra Foods—which in June launched the OZO plant-based brand—recently took a full-page ad in The New York Times in which the company’s CEO, Darcey Macken, struck back at Lightlife.

Noting that “plant-based meats have been around for decades,” Macken wrote that “we’d be remiss if we didn’t take a moment to say thank you to Beyond Meat and Impossible Foods, who shined a light on this space and helped elevate it to where it is today.”