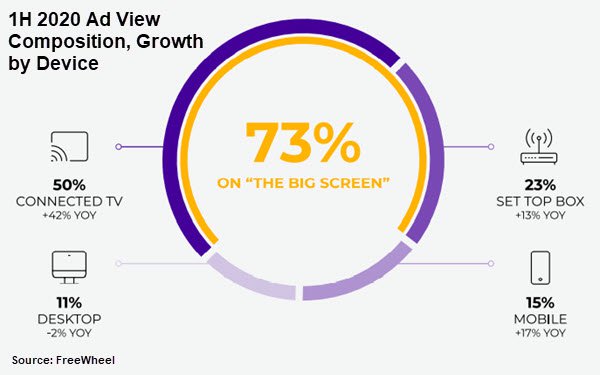 Need more confirmation of just how transformative the COVID-19 pandemic has been for video and advanced TV, along with the rest of our lives?

FreeWheel’s U.S. Video Marketplace Report for the first half supplies it, in spades.

The stats from the Comcast-owned advertising platform show premium video ad views up by nearly a third (32%), driven by a 17% year-over-year increase in video views.

And despite the work- and school-at-home phenomena, desktop ad views actually declined by 2%, comprising 11% of the total.

“Viewers are turning to premium video more than ever, and, given the choice, they are choosing to watch it in a lean-back, engaged way on their television sets,” sums up David Dworin, FreeWheel’s head of advisory services. “Despite a challenging year for the media industry, the power and popularity of premium TV is as clear as ever, and we expect this trend to continue even after the pandemic is behind us.”

Live ad views grew 38%, and accounted for 38% of overall ad views, as increased consumption of news and ad-supported video-on-demand services more than offset the lack of sports during the period.

Across devices, long-form viewing rose 33%, to account for 55% of ad views. With the sports shutdown, clip ad views grew just 3%, and accounted for 7% of ad views.

Within CTV, live ad views dominated heavily, at 77% of total, versus just 40% within mobile and 30% within desktop. 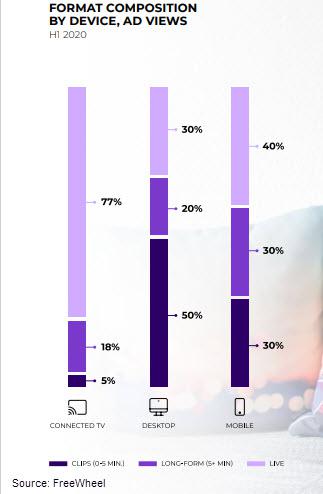 As it happens, the pandemic coincided with major entertainment companies’ already-underway push to establish direct relationships with consumers, and capture ever-more-crucial first-party data, through streaming service launches and acquisitions.

Within distributor digital/IP platforms, aggregators now account for nearly two-thirds (63%) of ad views, and MVPDs for 37%. Both segments grew by nearly a third during the first half. 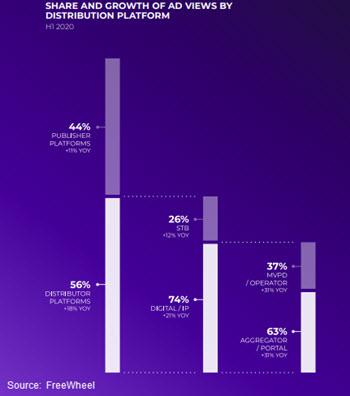 Ad loads remained stable compared to first-half 2019. Mid-roll breaks on CTV averaged 3.5 ads, lower than both mobile and desktop viewing. FreeWheel notes that during the height of the pandemic’s first wave, many brand ads were PSA-style messaging referring to COVID-19.

And with the industry working to reduce ad repetition in live and on-demand content, more than three-quarters of content had zero ad repetition. 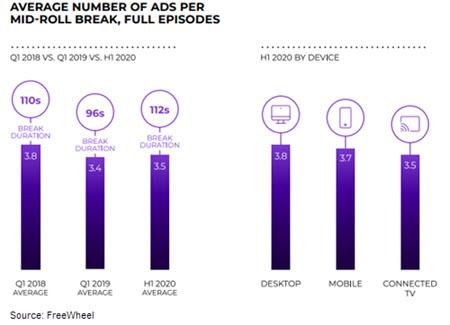