The Association of National Advertisers' annual Masters of Marketing Conference kicked off this morning with largely upbeat presentations by CEO Bob Liodice and Procter & Gamble Chief Brand Officer Marc Pritchard focusing on how the ad industry has responded as a "force for good" and a "force for growth" amid multiple 2020 crises of a global pandemic and explosive racial injustice, but it also revealed some nagging low points, especially for the digital supply chain.

While Liodice showcased data from a U.K. ISBA study showing that 15% of digital ad spending is going to "unknown" sources that account for $20 billion in costs to brands, Pritchard focused on the ills of social media -- especially its role in spreading unsavory content.

"Thirty years into the digital media age, we're still operating with very few boundaries that are self-imposed," Pritchard said during his opening keynote, adding that "social media is 5% of our spending but 100% of our problems."

He cited progress, including the ad industry's recent GARM (Global Alliance for Responsible Media) initiative, but added:  "It should be table stakes to expect digital platforms to remove content that is offensive to most" and that the ad industry would continue "holding digital media providers accountable."

He listed getting digital media to remove "hateful content" as one of five top priorities for P&G and the rest of the ad industry. The other four included:

During a follow-on Q&A with Liodice, Pritchard noted that these steps don't just make good societal sense (ie, being a "force for good"), but are good for the bottom line too ("being a force for growth").

He talked about a personal inflection point that came to him during a spiritual retreat 20 years ago during which the spiritual leader impressed on Pritchard that he had an opportunity as a businessman to make a difference in the world.

His epiphany was realizing that could also be a force for company growth, creating a "virtuous cycle" in which the forces of good and growth feed each other continuously. 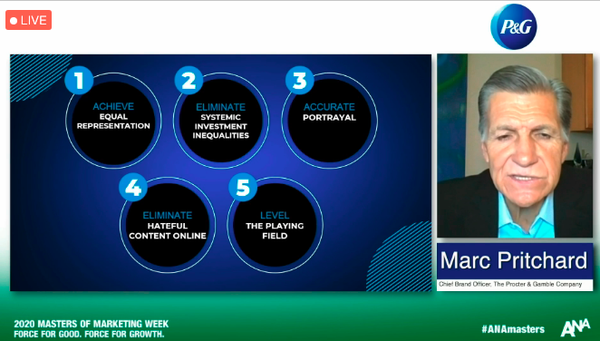