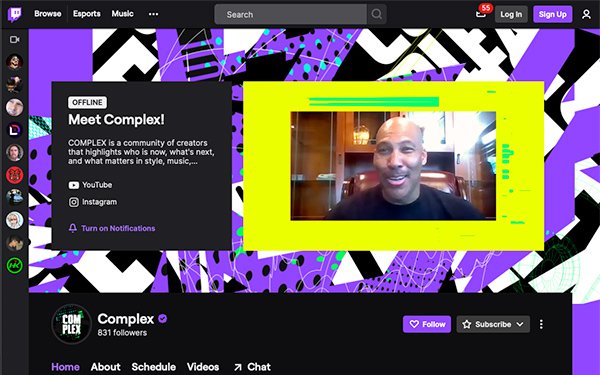 Complex is partnering with Twitch on its first interactive series for the live streaming platform.

The companies will produce three new programs on the Complex channel: a pop-culture talk show called “The Daily Drift,” a customization series called “One of One” and music competition “Type Beat Battle.”

The programming will premiere live on Twitch exclusively next week. Complex has plans to add programming in the future.

“It was only natural” to bring Complex’s young audience interested in fashion, music and culture to Twitch, stated Nick Wang, head of distribution and business development at Complex Networks.

“We are thrilled to have a new way to engage with and bring more amazing content to our fans through Twitch,” he added.

Originally a platform for video-game live streaming, Twitch offers users paid subscriptions, which help bring in revenue for content providers. Viewers get to influence the creative direction and discussions of each show in real time.

For the Complex channel, a Tier 1 subscription for $4.99 a month gives users ad-free viewing, the ability to chat during “Subscriber-Only Mode,” and other perks. Tier 2 costs $9.99 and Tier 3 costs $24.99 a month, with additional benefits.

“Through this partnership, we’re bringing the loyal readers and viewers of Complex behind the scenes, giving them editing power and creating a space for collaboration,” stated Jane Weedon, head of new verticals at Twitch.

“This is the beginning of what we see as the next phase of online entertainment — one we are excited to see become common amongst the media and entertainment industries,” she noted.

“One of One” will be hosted by Jake Polino, who will show the process of live customizations of sneakers, hats, T-shirts, jewelry, cars and more, with ideas crowdsourced from the live audience.

It premieres Monday, October 26, and airs Mondays and Wednesdays.

“The Daily Drift” will be hosted by Hannah Rad and Tino Cochino and keep viewers up to speed on the latest pop-culture news. It premieres Tuesday, October 27, and airs Tuesday through Friday.

Inspired by trends on social media, “Type Beat Battle” pits two up-and-coming music producers against each other in a weekly competition judged by the live audience.  Hosted by Ryanimay, the series premieres Friday, October 30, and airs weekly on Fridays.