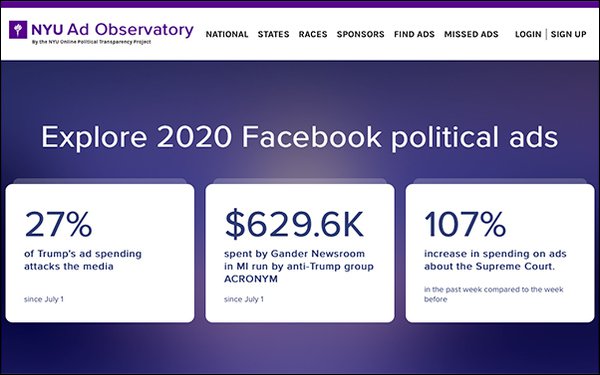 Citing a policy against data scraping, Facebook has told NYU researchers to halt a project that explores political ads on the platform.

The NYU initiative, AdObservatory, relies on data gathered through the downloadable AdObserver browser extension, which enables researchers to evaluate ad spending, transparency and other matters related to political campaigns. AdObservatory researchers recently found that Facebook had failed to label all political ads, according to Buzzfeed.

NYU researcher Laura Edelson says the project will continue despite pressure from the company.

“The public has a right to know how political ads are targeted, so we will not be complying with this request,” Edelson said on Twitter late Friday.

“Collecting personal data via scraping tools is an industry-wide problem that’s bad for people’s privacy & unsafe regardless of who is doing it,” he tweeted on Saturday night.

He also said Facebook's recent consent decree with the Federal Trade Commission requires the company to “report violations like these as privacy incidents.”

Leathern added that the company gave NYU 45 days to comply with the cease-and-desist, which would enable the researchers to collect data through the end of November.

The battle is similar to a contested court case underway between the ad services company BrandTotal and Facebook. BrandTotal also gathers data via a downloadable browser extension installed by users.

BrandTotal struck back by requesting a restraining order that would require Facebook to stop blocking BrandTotal, and to rescind the takedown notice sent to Google.

U.S. District Court Magistrate Joseph Spero in the Northern District of California has scheduled that matter for a hearing Monday.