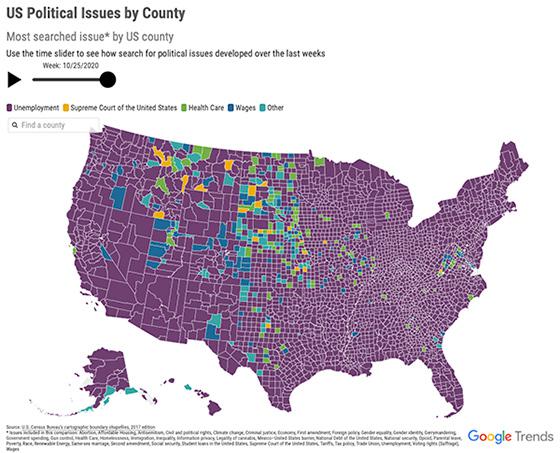 What issues will drive the results of the 2020 presidential election Tuesday?

This year has been one of transformations. The advertising industry and businesses had to reinvent themselves based on the COVID-19 pandemic and changes in consumer behavior.

With all the number crunching and data, it’s still difficult to forecast the outcome, but Google Trends data can tell us some of the top issues collectively driving decisions.

Perhaps it didn't matter how much candidates spent on television, digital and print advertising. MediaRadar estimates $425 million was spent across national TV, digital and print for political ads between January of 2020 and October of 2020.

During this time, Google Trends identified five issues that people searched for most during the past week. They include unemployment, crime, Supreme Court, health care and race.

The most searched issues by U.S. County changed dramatically between September 13 and October 25, the days being tracked in Google Trends.

In September, voters were most concerned with unemployment, Supreme Court picks, and other, as they tried to sort through political issues. In October concerns moved mostly to unemployment, with healthcare and wages specked throughout the middle of the U.S.

The number of searches is not an indicator of who will win the election, but rather an indicator that voters are less familiar with the person’s polices and need more information before making a decision to cast their ballot. Libertarian Party presidential nominee Jo Jorgensen accounted for 6% of candidate searches, and running under the Green party, Howie Hawkins accounted for 1%.

Most interesting is the search interest by Californians for presidential candidates. On October 23, Google Trends shows a 100% spike in searches for Donald Trump vs. Joe Biden at 57 on the same day. The spike has since leveled off and was 32 and 31, respectively, on October 30.