The Fox-Trump Industrial Complex: Why It's Bad For America 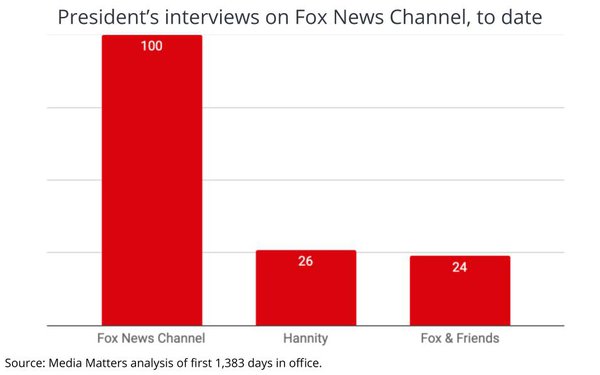 The President's interview on Fox News Channel's "Fox & Friends" Election Day morning marks his 100th exclusive interview on the cable news network since he took office 1,383 days ago, according to a Media Matters analysis published today.

The incestuous nature between Fox News Channel -- indeed most of Rupert Murdoch's media empire, including The New York Post and The Wall Street Journal -- and the President is not exactly a trade secret, but the magnitude of it, and especially the propagandized rhetoric and disinformation has contributed to the division of American society.

It's not mere political polarization the way partisan media outlets have spun their biases in the past -- for liberals or conservatives alike -- but according to an ongoing analysis by Ipsos' political team, actually dividing American reality into two "alternate" versions.

Whether or not you think that is healthy for society or protected as free speech, it's also being powered by some profitable economics -- you know, advertising.

According to a Pew Research Center analysis of data from Kantar, Fox News Channel's advertising revenues surged 41% during the second quarter, as the COVID-19 pandemic surged, as well as much of Fox's disinformation about the science surrounding it.

Fox's cable networks division saw its third quarter ad revenues rise 17.7% vs. the same quarter in 2019, which is some interesting profiteering during a pandemic.

It's no secret that I've never been a fan of Rupert Murdoch. I first became aware of him -- and actually was inspired to go into journalism -- when listening to New York radio station WBAI's coverage about the Australian media magnate's takeover of New York Magazine Corporation, including the Village Voice, and his ousting of Clay Felker as the company's editor, as well as much of its management team.

Little did I know that I would eventually end up working for that team, who went on to form Adweek, and even reporting to my hero Felker. One of those Adweek founder partners, Ken Fadner, went on to create MediaPost, and I'm still working for him today.

Over the years, I've covered numerous stories about Murdoch and how he has used the power of media to influence politics, society and profits.

And as much as I've detested his style of sensationalized journalism and tawdry programming, I also deemed him an exploitative opportunist feeding the underbelly of society.

I also covered Murdoch and the late Roger Ailes launch of the Fox News Channel, and their brilliant insight that there was an appetite for alternative political news coverage pandering to the extreme right. What I didn't anticipate was how that would eventually be weaponized to divide America.

Another Media Matters analysis shows just how savagely the Murdochs have allowed that weapon to attack the truth, including using its New York Post to publish an unsubstantiated conspiracy theory about Joe Biden's family, and then getting Fox News Channel to amplify it via incessant coverage.

The timing of the "expose," and Fox News Channel's decision to devote nearly 600 news segments totaling 36 hours of aggregate TV news broadcasts in the lead-up to today's U.S. presidential election may make good business sense for the Murdoch's, but I once again have to question what kind of business sense that makes for the brands that advertise on it? Whether or not it's good "ROI" for brand awareness or lift, is the distortion of American democracy something you want your brand associated with? 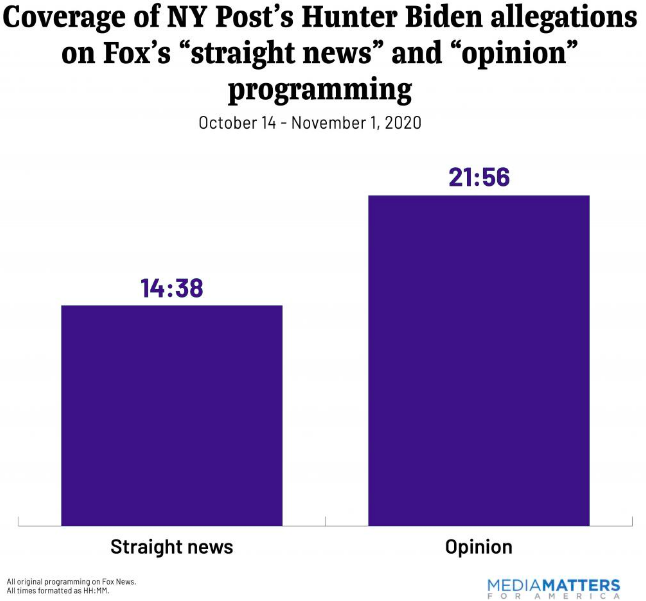 Free speech, corporate profits and other rationales aside, I just have to ask you if you think that's been good for America?

Or better yet, let's remember what happened when Fox News Channel prime-time star Sean Hannity asked that very same question of a genuine journalist, Ted Koppel, during a 2017 interview on "CBS Sunday Morning." (See excerpt below.)