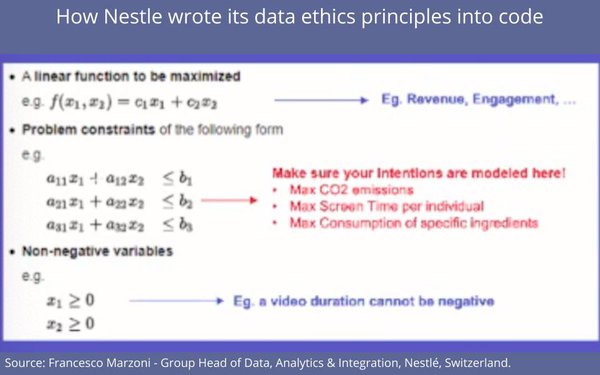 EASTON, CT -- The role of ethics took center stage Thursday on Day 11 of the i-com Global Forum For Smart Data Marketing where some of the world's top marketers and data analytics firms discussed the ethical use of so-called "smart data," especially the kind that is being empowered by a new generation of machine learning and AI. The discussion took a tangible form during a keynote by Nestle Group Head of Data, Analytics & Integration Francesco Marzoni in which he revealed actual algorithmic code the company wrote to ensure its data was being processed in an ethical way.

In the example depicted above, Marzoni said the code processes Nestle's data in a way that will ensure "environmental and social well-being," which is a key element in the marketer's "AI prioritization" and one of "six pillars" governing its ethics principles.

The other pillars, he said, include:

But by revealing actual written code used to process it, Marzoni was making the point that it's not good enough to have principles, or a code of ethics, unless you actually execute on them. And in the world of smart data marketing, that means writing actual code that processes it that way.

Without that, he said, "all of this work on ethics remains on PowerPoints, and that's not the goal... We have to bring it down to the level of code."

"Compliance is about rules," he continued, "Ethics is about the right thing to do."

Mager said much of the industry's focus to date has been on compliance as a form of "deterrence" or risk mitigation in the face of potential legal and/or regulatory liabilities, but that marketers are developing ethical codes and principles as more of a "forward-looking" step to ensure "the impact you want to happen."

He said those ethical decisions can have a material impact -- even a bottom-line one -- for a brand's stakeholders, including management, boards, investors, "but particularly on your customers."

"Ethics is rooted more in the notion that people inherently want to do good," he explained.

Sachiko Scheuing, European Privacy Officer for Interpublic's Acxiom unit, said until recently the concept of ethics was more ethereal for many marketers, but she said a number of recent regulatory changes, as well as the Cambridge Analytica expose, have given it impetus and made it much more actionable.

While the practical application of ethics can be subjective and contextual and "may be very difficult to formulate in tick boxes," she recommended marketers utilize a simple test: "How do you feel about it? That would be my answer." 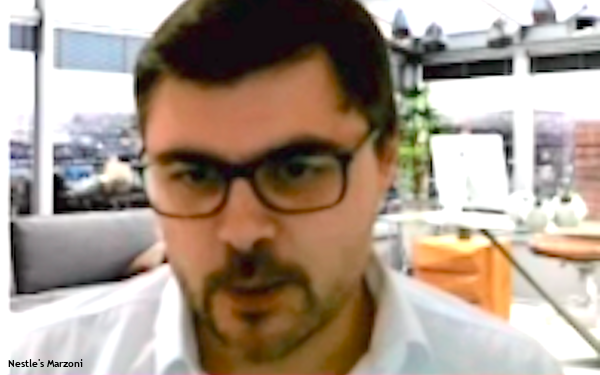