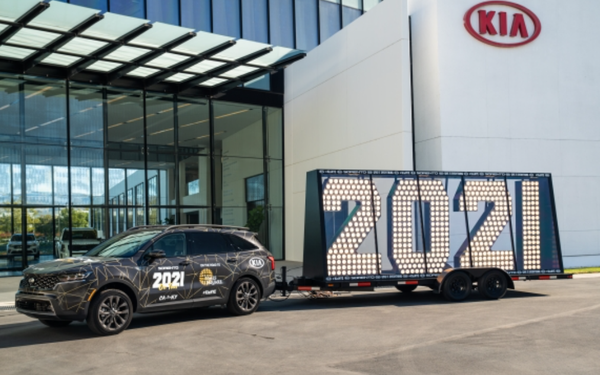 Kia Motors America will launch a creative campaign for the Sorento on Dec. 31 during "Dick Clark’s New Year’s Rockin’ Eve with Ryan Seacrest 2021."

The automaker will host frontline workers and their families in Times Square so they can ring in the New Year. The frontline workers will be shuttled to and from the festivities by a fleet of Sorento SUVs. Kia is the official countdown sponsor of the event.

The effort follows a cross-country road trip featuring a Sorento from Kia headquarters in Irvine, California to New York. The vehicle will transport the 2021 numerals for the ball drop. The event, which annually draws massive crowds who stand shoulder to shoulder for hours on end, will be held without live spectators this year.

Throughout the road trip and including all activities in Times Square, Kia will adhere to CDC recommended protocols regarding face masks and social distancing guidelines, according to the automaker.

National Geographic will document via photos and video some of the inspirational people and places the vehicle and its occupants encounter along the way. The campaign is from Kia AOR David&Goliath.

The Sorento will “bring a little piece of the energy and fun of New Year’s Eve in Times Square to people nationwide. This will also be a reminder that we’re all in this together and that the New Year brings new opportunities and excitement,” Wager says in a release.

After arriving in Times Square, the “2021” numerals will be part of a larger vehicle display for three days before being installed at the top of One Times Square for the New Year’s Eve Ball Drop.