IPG's Roth: When Things Are Crazy, Clients Need Us More Than Ever 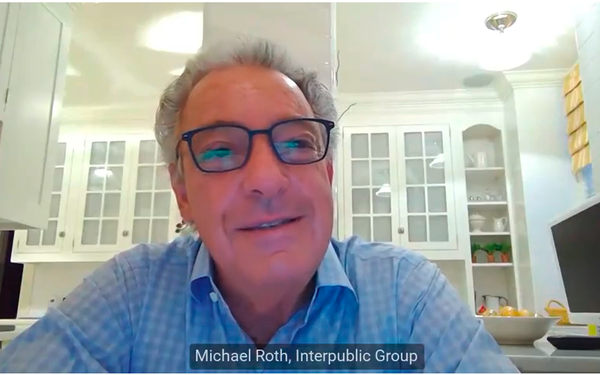 In what is likely one of his swan-song performances before an investor’s conference, Interpublic Chairman Michael Roth this morning boasted that during his reign he disproved several industry axioms -- especially that agency holding companies are all the same, and that they would necessarily suffer during a global economic crisis caused by a pandemic.

“When things are crazy, clients need help,” Roth said during his last briefing at UBS’ annual media industry conference, which in the spirit of that statement, is being held virtually this week.

By offering highly differentiated products and services -- including the holding company’s “open architecture” structure, and uniquely integrated media and data assets such as Kinesso -- Roth told UBS attendees IPG was able to outperform its peers and will end the year “net new business positive,” just as he turns the reins over to new IPG chief Philippe Krakowsky.

While Roth will remain chairman, he used today’s briefing to bask in what proved to be a winning strategy of differentiation, diversification and growth during his tenure as IPG chief.

“I came from the outside of the industry,” he acknowledged, adding that when he joined IPG, agency holding companies were viewed as undifferentiated by clients and investors.

“Everybody got put in the same box,” he recalled, adding, “I think what we’ve proven is that’s not true.”

He touted that IPG has been outperforming its peers in both organic growth and margin expansion, and that the performance is a direct result of the bets its made in recent years, including the ambitious acquisition of big consumer data platform Acxiom, “embedding” digital inside all of its operating units, and making a “big bet” on media and talent.

While he acknowledged that the pandemic had a material impact on its business, especially when clients pulled budgets during the second and third quarters, he said it actually made the holding company “much more relevant” to them precisely because of the investments and the “go-to-market” strategy IPG cultivated over the past few years.

“I think where everyone got this wrong,” he said, adding, “We are not a dinosaur and we are relevant to the marketplace right now.”

While the impact of surging COVID-19 infections creates limited visibility on IPG’s and the industry’s performance for the first- and second-quarters of 2021, he said the company will continue to “outperform” its peers and that he believed the outlook its Magna unit published Monday for a healthy ad spending rebound in 2021.