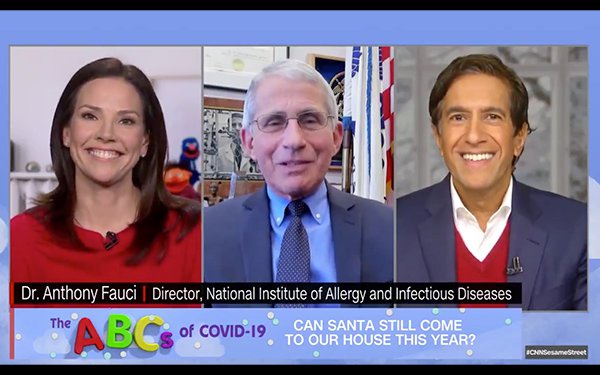 Santa Claus this year sports a purple face mask as he makes his rounds delivering toys. But to ensure kids and others stay safe as he visits their homes Christmas Eve, he reportedly received one of the first doses of the COVID-19 vaccine.

That’s according to Dr. Anthony Fauci, director of the National Institute of Allergy and Infectious Diseases, who will become part of President-elect Joe Biden's coronavirus response team. Fauci also takes on the role of chief medical adviser.

During CNN's Sesame Street Town Hall, Fauci said he vaccinated Santa Claus against COVID-19. "I measured his level of immunity, and he is good to go," Fauci said in a video.

There are several Santa trackers these days. It has been a yearly tradition to track Santa online.

This is the North American Aerospace Defense Command’s Santa Trackers 65th anniversary. People can also follow Santa’s sleigh via NORAD, which is responsible for protecting the skies over the U.S. and Canada.

“Each December 24, we track Santa’s ride,” according to the video. “It’s a very special mission, and we do it with pride.”

Since NORAD monitors objects in air and space, one is Santa’s sleigh. The organization began tracking Santa in 1955, when children called NORAD on Christmas Eve to find out where Santa was at any given moment. Since 2012, they have been able to see Santa’s location on a 3D globe built with CesiumJS, an open-source library for visualizing geospatial data.

Even during one of the craziest years, starting Thursday, kids and adults can follow Kris Kringle around the world as he delivers presents, with help from Google Android, Google Maps or Google.com. Google also lets those interested stream Santa’s journey on their TV using Chromecast.