Why 2020 Was A Year Of Both New And Old Normals 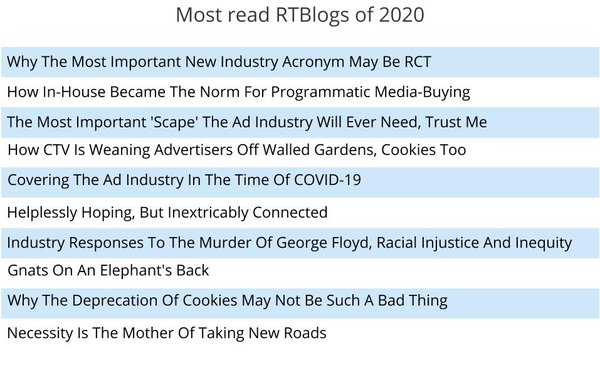 During a year in which norms were challenged on almost every front, the most-read "RTBlog" columns focused mostly on normal programmatic and real-time media-buying issues, not the bigger existential threats surrounding them.

In fact, the most-read story was our coverage of a push by the Advertising Research Foundation and Central Control CEO Rick Bruner to raise industry consciousness around what may be a superior method of measuring campaign effectiveness than traditional regression models. The concept, called randomized control testing (or RCT), utilizes scientific research methods for variant testing.

Other top stories focused on how programmatic media-buying has become an in-house norm, the upside of the deprecation of cookies, and why the big advertiser boycott of Facebook would have little long-term impact.

But a few of the most-read "RTBlogs" dealt with the broader issues confronting all of us, including the industry's response to George Floyd's murder and the response to racial injustice, as well as the COVID-19 pandemic.

My personal favorite, in retrospect, was about how we found new ways of using technology -- things like Zoom, and a simultaneous real-time choir performance via YouTube (see below) -- to remain connected during a a global pandemic.