How In-House Became The Norm For Programmatic Media-Buying 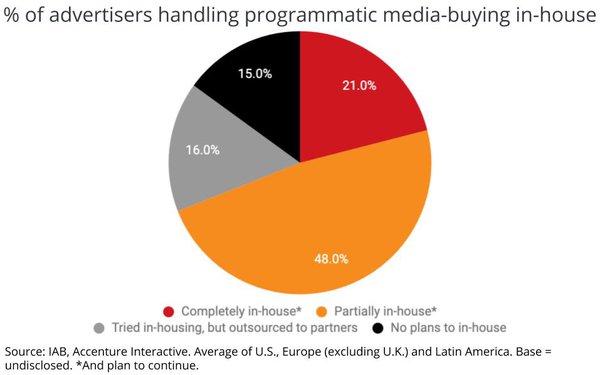 When it comes to the fastest-growing segment of media-buying -- programmatic -- in-house is now the norm for most clients worldwide. That's the finding of a new report released this morning by the Interactive Advertising Bureau (IAB) and Accenture Interactive.

While the trend should not be surprising to anyone who has been following media-buying for the past decade, the stat may be: Only 15% of advertisers say they have no plans to bring programmatic media-buying in-house.

While the report indicates that programmatic media-buying still is largely a hybrid approach combining internal and external teams, the direction clearly is moving a greater share of media-buying in-house.

The reasons are obvious, especially the greater availability of data to effectively target consumers, and the fact that much of that data often is related to proprietary brand data: you know, CRM, loyalty, opted-in consumers, etc., which is used to model and/or target lookalikes.

That likely will increasingly be the norm for many brands, especially as they adjust to a post-cookie world of programmatic audience-buying.

“As the industry braces for the loss of third-party cookies and audience identifiers, direct engagement in programmatic advertising matters more than ever,” states Orchid Richardson, vice president and head of the IAB's Programmatic+Data Center, noting: “Brands aren’t generally taking over the whole process, but they are taking over the development of programmatic strategy to strengthen customer connections and to control both first-party data and functions that relate to legal and regulatory compliance.”

Another accelerant has been the pandemic, says Accenture Interactive Global Head of Programmatic Services Scott Tieman, noting: “In the face of the Coronavirus pandemic, brands have leaned more heavily on programmatic as consumers are remaining inside and online. Grocers, CPGs, and telecommunications are creating more relevant ads to reflect the current environment. This may drive more lasting changes, as brands see the benefit of having well-integrated programmatic teams capable of responding to unexpected events.”

In any case, the report confirms that the in-house media-buying genie is out of the box and it's unlikely it will ever go back in. The study found that only 16% of marketers have tried bringing programmatic media-buying in-house, but ultimately opted to outsource it to other partners.