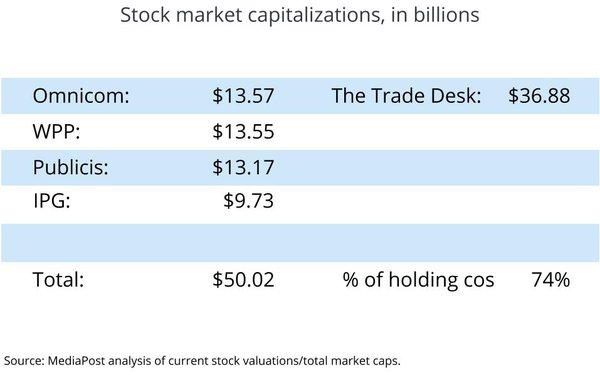 As far as industrial roadways go, Madison Avenue has lost its luster on Wall Street. That is more or less what the subject line of an email dispatch from Campaign magazine suggested this morning, teasing: "Are Holding Companies Undervalued?"

The speculation comes only a couple of years after another French agency holding company, Havas, was acquired by Vivendi. and as the smallest of the major publicly traded holding companies, MDC Partners, is poised to be merged with The Stagwell Group, but the story behind the story is the slipping marketplace fortunes of Madison Avenue's biggest companies.

I started thinking about this a month or so ago when a source casually pointed out that the independent DSP (demand-side platform) used by most of the big agencies, The Trade Desk, how has a stock market capitalization greater than most of the biggest agency holding companies that use it.

I added up the four pure-play publicly traded agency stocks that currently have reported market caps, and it totals about $50 billion, meaning that The Trade Desk's $37 billion cap is worth about three quarters of Madison Avenue's total.

I know most of you are long familiar with the Mary Meeker-esque slide showing how industrial shifts have distorted the stock-market caps of former major industry players (think Detroit automotive companies vs. Silicon Valley's giants), which are intended to underscore how industrial revolutions fundamentally shift value.

Look no further than the recent CES conference, which showcased how Detroit's biggies were transforming themselves into electric-powered moving media devices and then compare the combined market cap of General Motors, Ford and Daimler Chrysler ($182 billion) to Tesla's ($783 billion) and you realized they are less than a quarter of a company that didn't exist two decades ago.

I've been covering the same industrial revolution for more than four decades, and the only thing that has been constant is how new players have disrupted the marketplaces -- and values -- of legacy players.

What I don't understand is how the greatest value-creators in the world -- the companies that literally create brand equity for most the world's greatest brands -- have slipped so much, so fast? Maybe it's time for Madison Avenue to brand thyself.

Maybe it's because the thing agencies have historically done best -- created brand equity -- actually isn't perceived as being as valuable as it once was in a world focused on short-term performance marketing, platforms, ecommerce and moving the next new D2C widget?

Or maybe Madison Avenue should do a better job of equating brand equity to financial equity.