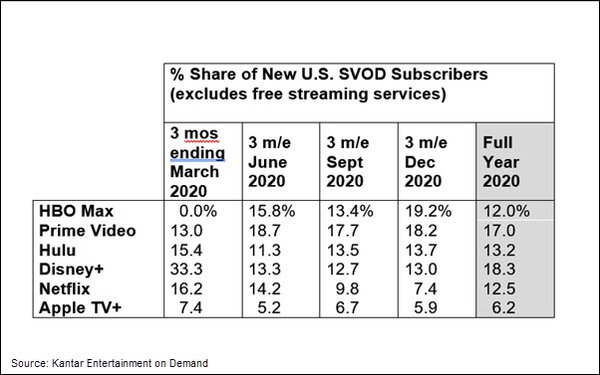 With Netflix is set to report its much-anticipated fourth-quarter results after today’s market close, most analysts appear to be expecting the world’s largest streamer to meet or exceed its projection of adding 6 million subscriptions globally — although most also expect its growth to slow in 2021, particularly in relation to the surge during 2020’s early COVID months.

Macquarie Securities analyst Tim Nollen, for instance, is projecting total 2021 net subscription additions of 26.7 million (including 2.2 million U.S.), or 13% growth for the year. If Amazon hits its 6 million Q4 target, it will have added 34 million subs in 2020, representing 20% growth.

Meanwhile, new Kantar research indicates that while Netflix’s overall subscriber retention remains strong, competition from major new subscription video-on-demand services wasn't the only factor contributing to the leader’s decline in U.S. share of new SVOD subscribers over the course of 2020.

But Netflix’s price increases in 2020’s fourth quarter was the key reason behind increased levels of planned cancellations. (Netflix kept its basic plan at $8 per month, but raised its most popular, standard plan by $1 to $14 per month, and its premium plan, $2 to $18 per month.)

But another factor was “continued blowback” from the service’s September release of “Cuties” — a Sundance award-winning French film that the director said was intended as a condemnation of the sexualization of children, but which conservative U.S. legislators used as a political rallying cry.

Nearly one in 10 Netflix cancellations in Q4 resulted either directly from the “Cuties” controversy, or “broader disagreement with Netflix’s political leanings,” reports Sunnebom. “These reasons impacted potential acquisition opportunities, as well as retention of existing subscribers.”

But HBO Max, which didn’t launch until the end of May, pulled impressive shares in all three remaining quarters, to end up with 12% at year’s end.

The upswing in Q4 to 19.2% was particularly notable — and the data suggests that WarnerMedia’s decision to release “Wonder Woman 1984” on Max and in theaters simultaneously was the driver, says Kantar.

Forty-one percent of new HBO Max subscribers in Q4 cited specific content as their key motivator for signing up — up from 32% in Q3 — with “Wonder Woman 1984” cited as the key title by one in five of the new content-driven subscribers.

Nevertheless, in what may be good news for WarnerMedia from an industry politics standpoint, if perhaps not from a financial one, the same proportion of HBO Max subscribers went to cinemas in Q4 (15.3%) as in Q3 (15.4%).

Amazon Prime Video “shows little sign of being negatively impacted by new service launches,” largely thanks to the service being part of its Prime subscription membership.

With online shopping an unprecedented levels, Prime membership saturation levels rose from 54.5% in Q3 to 56.4% in Q4.

Hulu also performed well for the year overall, with a 13.2% share of new paid subscribers — even slightly outperforming Disney+ in Q4. “Rather than relying on key headline titles to attract new customers, Hulu is winning through a powerful combination of being perceived as excellent value for money and having a strong variety of TV series,” says Kantar.

NBC Universal’s Peacock, launched in Q2, continues to make progress in both the ad-supported video-on-demand (AVOD ) and SVOD space, according to the research. When the free version’s users are stripped out, its share of SVOD subscribers was 4.4% in Q4.

Over a third (35%) of Peacock users are premium subscribers, indicating consumer demand beyond their no cost option. As would be expected, given the differences in available content in the tiers, users are less likely to advocate for the free version than the paid ones (Net Promoter Score scores of +7 and +26, respectively).

Upgrade rates from the free to paid tiers are low but “the positive reaction to the paid service provides promise for increasing customer value in future quarters,” observes Kantar.

Some more general bits of information from the report:

*SVOD subscriptions in the U.S. totaled 233 million at the end of 2020. (The Entertainment on Demand service launched this year, so a comparative number isn’t available for 2019.)

*29% of new SVOD subscribers identify specific TV show or movie titles as a key factor in their sign-up decision.

*Among TV shows streamed on SVOD, the top 10 most recommended were “Ozark,” “Tiger King,” “The Mandalorian,” “Schitt’s Creek,” “The Queen’s Gambit,” “The Crown,” “The Boys,” “Stranger Things” and “Outlander.”