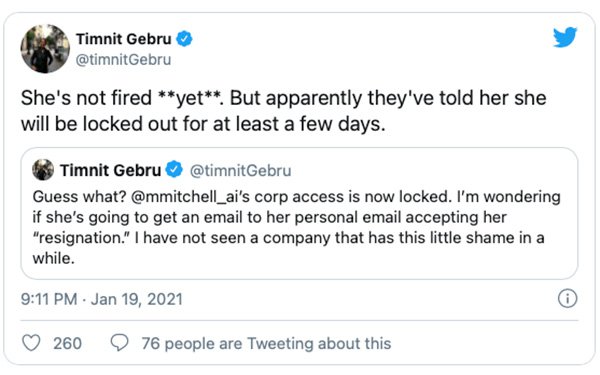 Alphabet's Ethical AI unit is responsible for developing the company's technology in a socially responsible manner.

Mitchell founded the Ethical AI team, built a cross-product area coalition around machine-learning fairness, and is a critical member of academic and industry communities around the ethical production of AI.

Mitchell's suspension comes on the heels of Google’s firing of former co-lead Timnit Gebru, who called it “an attack on the people who are trying to make Google’s technology more ethical.”

“What happens to Mitchell will continue to shape attitudes toward corporate self-governance and speculation about the veracity of research produced with Big Tech funding,” Gebru wrote in a tweet.

The paper that forced Gebru out of Google builds on the work of other researchers.

It presents the history of natural-language processing, an overview of four main risks of big language models, and suggestions for further research, but the conflict with Google seems to focus on the risks.

“With AI permeating every aspect of our world — from criminal justice, to credit scores, to military applications — paying careful attention to ethics within the industry is critical," wrote the AWN. “As one of the most profitable players in the AI industry, Alphabet has a responsibility to continue investing in its ethical application.”