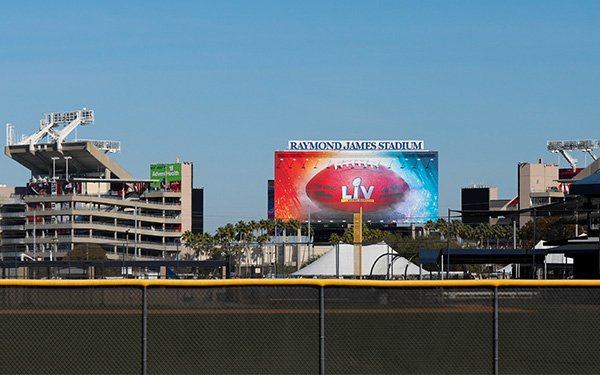 With a week and a half to go -- and some veteran Super Bowl advertisers now on the sidelines -- CBS has sold out national ads for the big game.

The Super Bowl, which is reported to have 77 commercials, is “virtually” sold out, according to a CBS spokesperson. Media executives say typical last-minute individual advertiser changes and additions can occur.

CBS had initially been pricing 30-second commercials at around $5.6 million, according to media-buying executives. Kantar, the advertising research company, says 2020 pricing was at $5.2 million.

The game airs on February 7, featuring the Kansas City Chiefs vs. the Tampa Bay Buccaneers.

Concerns about the pandemic, the U.S. economy and change in Presidential administration have pushed some longtime Super Bowl marketers to the sidelines this year, including Anheuser-Busch InBev’s Budweiser, Coke, Pepsi and Ford Motor.

Kantar says Anheuser-Busch InBev has been the most prominent advertiser on the Super Bowl, on average, accounting for 10% of total Super Bowl ad revenue in each of the last five years.

Creative and marketing executives have reportedly worried about what ‘tone’ TV commercials should have this year.

A year ago, Fox sold out all commercial inventory in the Super Bowl by Thanksgiving.

Nielsen-measured rating for the game in February 2020 between Kansas City and San Francisco totaled 99.2 million viewers on Fox. Another 2.8 million viewers streamed the event on digital platforms, according to Fox.

A year ago, Kantar says the almost four-hour-long game pulled in $448.7 million in advertising revenue -- up 33% over the previous year. There were a total of 46 commercial minutes for the 2020 game.