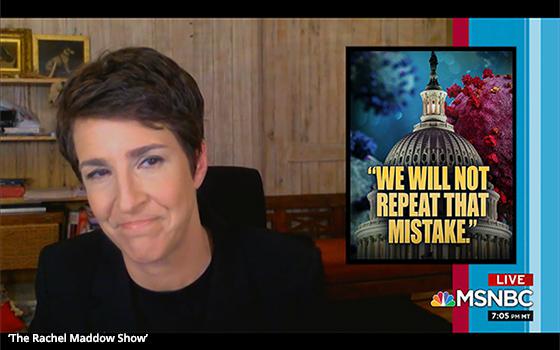 CNN had its most-watched month ever in prime time and total day viewing: Monday through Sunday prime-time viewing rocketed up 125% versus a year ago to a Nielsen-measured 2.74 million viewers in blended metrics of live program-plus-seven day time-shifted viewing.

CNN and MSNBC were the No. 1 and No. 2 and overall viewer rating networks in all of cable TV.

MSNBC also scored the best results of the three networks when looking at weekday Monday to Friday prime-time viewing with 3.4 million viewers, while CNN was at 3.1 million and Fox News Channel came in at 3 million. MSNBC rose 53% versus a year ago; Fox was down 13%.

MSNBC’s “The Rachel Maddow Show” became the No. 1 regularly scheduled show in all of cable TV -- at 4.3 million viewers, up 40% and besting previous top individual Fox News Channel prime-time programs. “Maddow” had the highest-rated month at 9 p.m. in MSNBC history.

The big drop for Fox was largely due to political viewers leaning on the three cable TV news networks, with Joe Biden winning the Presidency and Democrats winning control of the U.S. Senate, according to analysts.