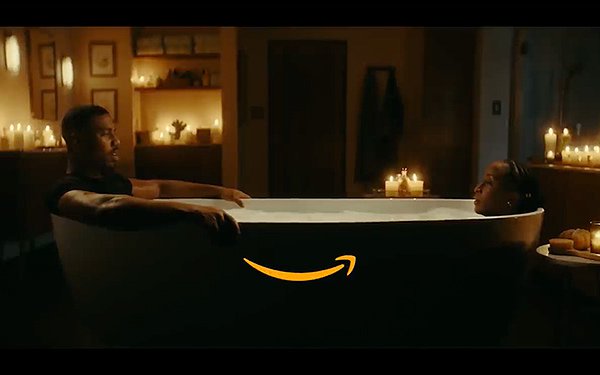 Content driving website traffic and buzz this year runs the gamut, from video to stats about some of the hottest products and legendary players.

The 60-second Super Bowl ad, set to premiere during the second half of Sunday's game, begins with an Amazon female employee admiring the smart device. "The Most Beautiful Thing" by Bruno Major streams in the background.

“It’s just flawless, isn’t it?” she said. “I literally couldn’t imagine a more beautiful vessel for Alexa to be inside.”

Then she looks up, glances out the window, and sees a bus ad for Jordon’s upcoming film "Without Remorse." That’s all it takes for her imagination to run wild, imagining Jordan inside Alexa responding to questions like “how many tablespoons in a cup?”

She asks him to complete several tasks, including turning on the sprinklers, dimming the lights, adding bath oil to her shopping list and even reading an audiobook chapter out loud. Hilariously, her jealous husband watches all of this unfold in disbelief.

The woman's vivid imagination of Jordan inside Alexa got Twitter talking. It's that what content should do? One person on tweeted: "Isn't it "politically incorrect", at best, to judge Alexa by her new body, which looks "maybe a little too good"? Does this really mean Alexa was unworthy of admiration before she improved her appearance, and that's what really matters? Shouldn't we appreciate Alexa for her mind?"

This year’s Super Bowl ads are a bit different, but viewers like myself are still having fun with them. Fans are not only searching for the latest ads but for stats on icons like Tom Brady, who hopes to lead the Tampa Bay Buccaneers to a Super Bowl victory.

Google Trends lists the five top questions about the icon as follows: how old is Tom Brady, how many rings does Tom Brady have, what team is Tom Brady on, why did Tom Brady leave the Patriots, and how many Super Bowls has Tom Brady played in.

GolfSupport, an online sporting goods site in the UK, used online analytics tool Ahrefs to find the most Googled questions about the legendary quarterback, and is using the data as content to drive those searching for the icon to its website through links.

The data, fielded on February 3, and commissioned by GolfSupport suggests more than 63,700 online searches per month ask “What is Tom Brady’s net worth?” and 59,250 want to know his age. “Who is Tom Brady’s wife?” is also a popular question at around 32,000 searches.