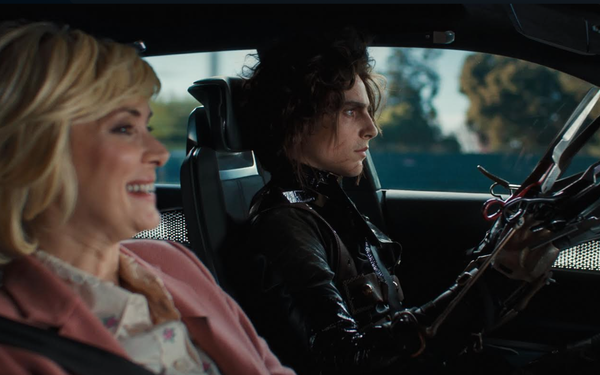 The spot plays up an optional feature for the vehicle, the Super Cruise semi-autonomous driving technology.

Winona Ryder, who starred in the 1990 movie as Kim, the title character’s love interest, returns in the spot as the mother of Edgar Scissorhands (played by Timothee Chalamet), the offspring of the movie’s Edward Scissorhands, played by Johnny Depp, who does not appear.

The 60-second spot created by Leo Burnett Detroit will debut in the fourth quarter. A 90-second version is available to view on the Cadillac website and YouTube.

In the spot, Edgar, who has inherited his father’s shears for hands, finds many of life’s tasks difficult. The spot chronicles the character’s daily challenges, from inadvertently deflating a football while playing with friends, to attracting a field of magnets during a class demonstration,

Taking note of her son’s joy as he uses a VR headset to try to drive, Kim gives her son a Cadillac Lyriq with Super Cruise. The feature allows Edgar to let go of the wheel once on Super Cruise-enabled roads and enjoy the drive.

The actors in the spot, which was not tested in focus groups, have multi-generational appeal, says Cadillac CMO Melissa Grady. Gen Xers and millennials are more familiar with Ryder, while Chalamet, a 25-year-old heartthrob, has a huge following among Gen Z.

Super Cruise will be available on the upcoming Lyriq, which goes into production in the first half of 2022, as well as the 2021 Cadillac Escalade, CT4 and CT5. Recent enhancements include lane change on demand functionality, which will allow the hands-free system to change lanes on the highway when requested by the driver and certain conditions are met.

Ryder was enthusiastic about reprising her role and was involved in shaping the spot’s narrative, Grady says. The actress is still friends with the movie’s noted director, Tim Burton, and called him during the shoot to get his feedback as the spot was being created, she says.

“It’s rare when a work you’re proud of continues to live on and evolve with the times, even after 30 years,” Burton says in a release.

It might seem unusual to advertise a vehicle that isn’t going to be available for more than a year on the Super Bowl, but Grady says it’s the perfect venue since Lyriq is so important not just to Cadillac, but to General Motors as a whole.

“This is the year when we really need to bring Lyriq to the world for people to understand what Cadillac means in the EV space,” Grady tells Marketing Daily. “The other thing is, now that we’ve got Super Cruise going more across the entire portfolio, we are really starting to bring the Super Cruise story to life, too.”

Everyday media buys don’t allow for the same type of storytelling as a Super Bowl spot, she adds.

“As we wanted to unfold this story, where else do you have the liberty to, almost in a movie format, get that out?” Grady asks. “The Super Bowl was the obvious place to be able to do something a little more magical.”

The spot has several  "Easter eggs," such as the house's street address -- 1902 -- which is the year that Cadillac produced its first two vehicles, the Runabout and Tonneau. It kicks off a trailing campaign on social media.

“We will be on Twitter for about 90 days with the hashtag #Lyriq, and we will still be telling the story,” Grady says. But the campaign "is not going to be just the story of Edgar Scissorhands," which is "really the first moment in a story we are going to tell this year."

More Super Cruise content will roll out thorough February and March, she adds.

Cadillac last appeared in a Super Bowl spot in 2012, when the GM luxury division introduced the sporty ATS model.