News Corp. this morning announced what it described as a “historic” three-year deal with Google, ensuring it will receive “significant payments” from the search giant for its news sites' content worldwide, including Australia.

While terms of the deal were not disclosed, the announcement comes as Google faces a potential stalemate with Australia, which is expected to pass a new law requiring Google to negotiate fair payment for news it distributes from publishers Down Under.

While News Corp. is now based in the U.S., it was founded in Australia.

The company said the agreement includes the development of a “subscription platform, the sharing of ad revenue via Google’s ad technology services, the cultivation of audio journalism and meaningful investments in innovative video journalism by YouTube.”

News Corp. said the agreement will add a variety of its news sites to Google News’ “Showcase,” including The Wall Street Journal, Barron’s, MarketWatch, and the New York Post; the U.K.’s The Times and The Sunday Times, and The Sun; and Australia’s The Australian, news.com.au, Sky News, and multiple metropolitan and local titles.

In a statement, News Corp. CEO Robert Thomson thanked the Australian Competition and Consumer Commission’s Rod Sims “and his able team, along with the Australian Prime Minister, Scott Morrison, and Treasurer Josh Frydenberg, who have stood firm for their country and for journalism.” 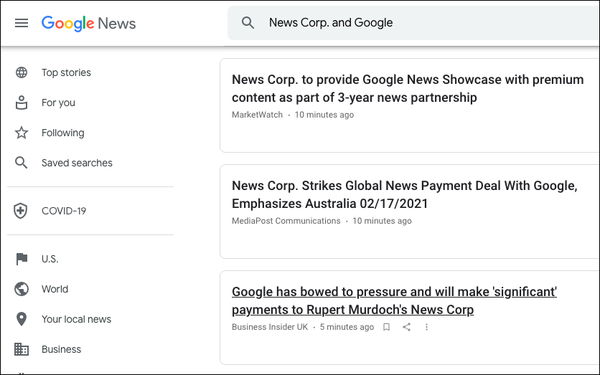