Uber Gets Google To Pull UberCheats From Chrome Store 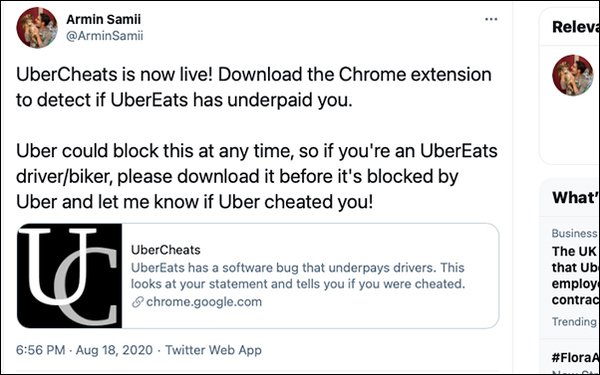 Uber convinced Google to remove a tool from the Chrome Web Store that helped drivers determine whether the company underpaid them.

Armin Samii developed the Chrome extension tool UberCheats, which launched in August 2020, after experiencing an incident as an UberEats driver.

A delivery, on a bicycle, took him "up one of the steepest hills in Pittsburgh, about four miles total," but he was only paid for one mile, he told Motherboard. He wasn’t frustrated over the few dollars lost, but rather because he knew after experiencing the mishap that “Uber was getting away with sneakily underpaying thousands of drivers and delivery people everywhere.”

Uber admitted in 2017 to underpaying New York City drivers tens of millions of dollars during a two-and-a-half-year timeframe. The average payout-per-driver would be about $900 each to correct the mistake.

Samii, in a tweet, wrote that Uber filed a false trademark claim against UberCheats, so it has been taken off the Chrome app store. Google claims that people might confuse it for the actual Uber product.”

Search & Performance Marketing Daily reached out to Samii to learn whether or not he can bring back the Chrome extension under a different name.

“Google has already agreed to reinstate UberCheats under the same name, but they have not yet,” he wrote in an email. “I do not plan to change the name, their trademark claim is invalid and the law they cited is not relevant.”

At the time Google removed the extension it about 400 weekly users.

Uber recently hired researcher Alex Rosenblat, who for years wrote about how Uber obscured pay structures and creates systems that facilitate discrimination against those workers.

Rosenblat last month took the role as head of marketplace policy, fairness and research. Her appointment, which Seattle Times reported, is part of an effort to reform Uber’s treatment and relationship with its drivers.