The 'Real Story' Behind Facebook's Australian News Blackout, According To Facebook 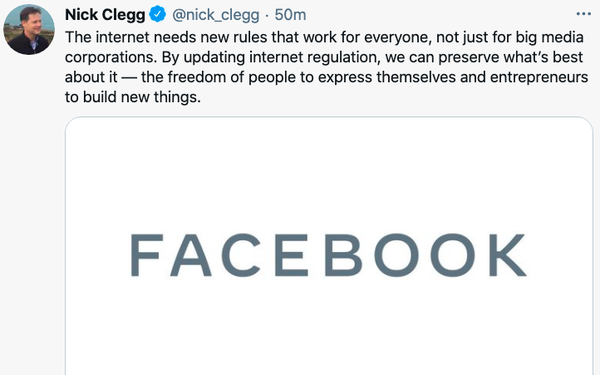 In a blog post and tweets on Twitter, Facebook Vice President-Global Affairs Nick Clegg explains the "The Real Story of What Happened With News On Facebook In Australia" -- from Facebook's perspective -- concluding that "the internet needs news rules that work for everyone, not just big media corporations."

Facebook, of course, is one of the biggest media corporations, and Clegg did not articulate what those new rules should actually be, but he said the real story is that Facebook's hand was forced by Australia's new law requiring companies like Facebook to pay news publishers for redistributing their copyrighted content.

"Facebook had two options: provide open-ended subsidies to multinational media conglomerates or remove news from our platform in Australia."

Clegg never explains exactly why Facebook walked back is decision to choose the latter option, nor does he explain how it plans to address the first one, but he argues that "the heart" of the real story is "a fundamental misunderstanding of the relationship between Facebook and news publishers."

That anyone outside the social network's organization would misunderstand it is, well, understandable, given that Facebook doesn't exactly seem clear on what it actually is in that relationship.

On the one hand, Clegg argues that Facebook is nothing more than a free promotional platform for news publishers enabling them to share their own content with Facebook's users to the tune of "5.1 billion free referrals to Australian publishers worth an estimated AU$407 million to the news industry."

On the other hand, he equates Facebook to a consumer electronics accessory in an automobile:

"It’s like forcing car makers to fund radio stations because people might listen to them in the car — and letting the stations set the price," Clegg opines, ignoring the fact that the radio industry is gifted free over-the-air broadcast spectrum by the American people in order to distribute their content free to consumer devices, because they make their money by selling advertising and pay licensing fees to copyright holders whose content they distribute (music labels and artists, syndicated news, talk and entertainment shows, etc.).

Also, the radio/carmaker analogy doesn't hold water when you consider subscription satellite radio services, but you know, there's not just one monetization model in media.

But it always seems Facebook wants to be the media model that is most convenient for its business model of that moment.

It likes to tell regulators it's not a "media company," but is more like a telecommunications service and therefore should not be regulated for content.

It likes to tell copyright holders it's not a media company, but is more like a consumer electronics device for distributing and promoting their content, even though it profits directly by selling advertising based on all those user impressions.

But Clegg is right about one thing -- new internet rules need to be created that work for everyone, including copyright holders and anyone who profits from distributing them.