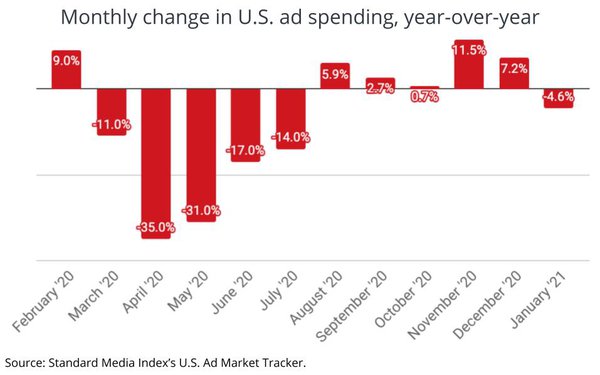 After rebounding from the recession in August and expanding for the remaining five months of 2020, the U.S. ad economy got off to a wobbly start this year, with ad demand declining 4.6% in January vs. the same month in 2020, according to a MediaPost analysis of the most recent data from Standard Media Index's U.S. Ad Market Tracker.

The tracker, a composite index of actual U.S. ad spending by the major agency holding companies, indicate it was the worst start of a new ad year in terms of total volume since January 2017.

It's unclear whether this January is an anomaly, or if the data indicates reports of an ad industry turnaround have been somewhat exaggerated.

January's decline reflects weak demand mostly from smaller ad categories, as the top 10 actually managed to expand 0.4%, while all others fell 15.7%.

Ad demand also continues to be mixed across media, with digital demand expanding 15.5% in January, while the national TV ad marketplace eroded 14.7%.