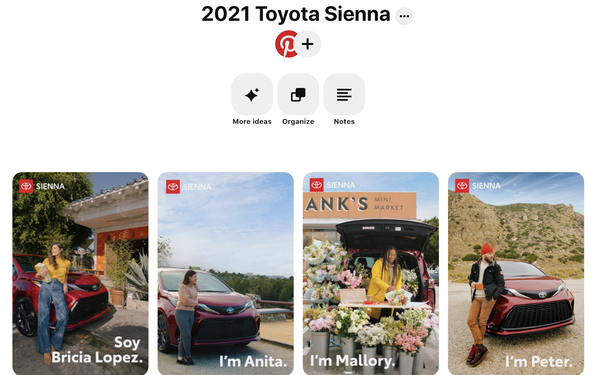 Toyota Motor North America aims to show the variety of people who have embraced minivan ownership via an effort on Pinterest.

Consumers are using the minivan for everything from date nights to man caves, according to the automaker.

According to Pinterest Predicts, Pinterest’s annual report forecasting consumer trends, the parking space is the new personal space, with searches for car date night up 200%, while searches for “car man cave” up 115%, and for and drive-in cinema up 190%.

This campaign is a joint effort between agencies Saatchi & Saatchi, Burrell, Intertrend and Conill.

There has been a 26% increase in active car research on Pinterest, according to the social media site.

Sixty-six percent of people say the inspiration phase is influential in determining what to buy, and they buy based on what they see on Pinterest, so this content can turn an idea into a reality.

The Creator Pins complement and enhance Sienna’s overall campaign messaging on the platform, she notes.

“Creators on Pinterest are leading the way in bringing these ideas to life for Pinners, who are especially creative and leaned-in consumers,” White says. “Creators are the next wave of focus for Pinterest.”

Additional elements of the campaign include a partnership with “Stranger Things: The Drive-Into Experience," she says.