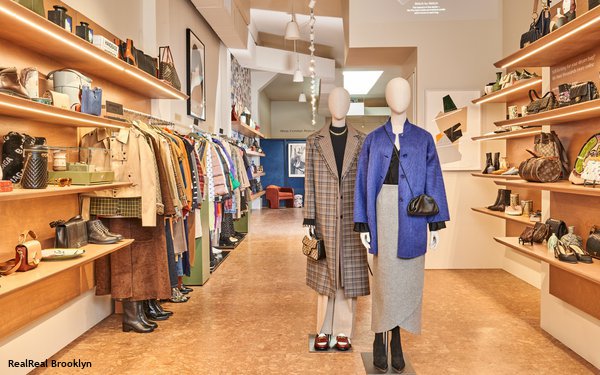 Business is looking up at the RealReal, and the ecommerce consignment company says more physical stores will help.

In announcing its quarterly results, RealReal says it intends to open 10 new neighborhood stores by the end of the second quarter, on top of stores already open in Brooklyn, New York, and Palo Alto and Newport Beach, California.

These stores increase sales, the San Francisco-based company says. But more importantly, they encourage people to jump into the luxury consignment game, bringing in items to resell even as they scoop up new-to-them fashion. And that buying and selling cycle is the lifeblood of the circular-economy pioneer.

About 30% of its new consignors in December came from retail locations, according to the company.

“Given early results from our newest stores, we are optimistic that this strategy will contribute to deeply engaging with more of our most valuable customers,” writes Julie Wainwright, founder and CEO, in a letter to shareholders. The retail strategy will “significantly unlock supply in these markets more efficiently than marketing investments alone,” she adds.

Customers at its stores are the brand’s heavy hitters.

Consignors who use a retail location consign more than 1.5 times as online consignors. And people who make in-store and online purchases spend three times as much as those who only shop online.

And new buyers in the fourth quarter set a new record, up 21%.

Still, the company’s bottom line looks less encouraging, with its net loss more than doubled to $53 million in the fourth quarter, up from $21.4 million in the comparable period of the prior year.

Marketing costs jumped 53% to $16.5 million in the quarter, “as we made the strategic decision to invest in marketing to position the company for a strong recovery,” Wainwright says.

The RealReal is also continuing its investments into authentication, accelerating plans to open its new Arizona facility.

UBS, which rates the RealReal as a “buy,” says the company is better positioned to take advantage of luxury sales as vaccination rates rise and people get back to “a more normalized economic environment,” writes analyst Eric Sheridan. “Over the long term, we remain positive as we continue to see a business with secular tailwinds (luxury market shifting online) and a unique marketplace model, driving a flywheel effect of supply and demand in the consignment industry.”