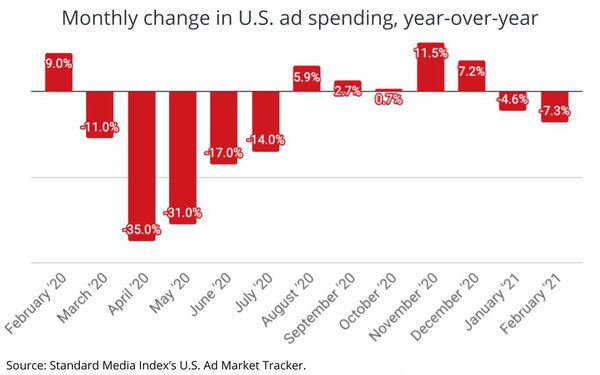 The U.S. ad economy contracted for the second consecutive month in February, dropping 7.3% from February 2020, according to a MediaPost analysis of data from Standard Media Index's U.S. Ad Market Tracker.

The declines in January and February of this year followed five consecutive months of expansion that ended 2020 and signaled an end to the COVID-19-related recession.

The February 2021 decline is also significant, because it compares with February 2020, which was the last "normal" month before ad budgets retrenched following the declaration of the global pandemic and a variety of related shutdowns in the U.S.

February's declines were influenced more by smaller advertisers than the largest ones, as the top 10 ad categories declined only 3.0% vs. a decline of 13.7% for all other ad categories.

In terms of media, digital continues to be the most resilient, actually posting an 18% gain over February 2020, while the national TV advertising marketplace declined 26.7% year-over-year.

March data will be especially telling, as it will compare with the first month of the 2020 ad recession, which lasted through July 2020.