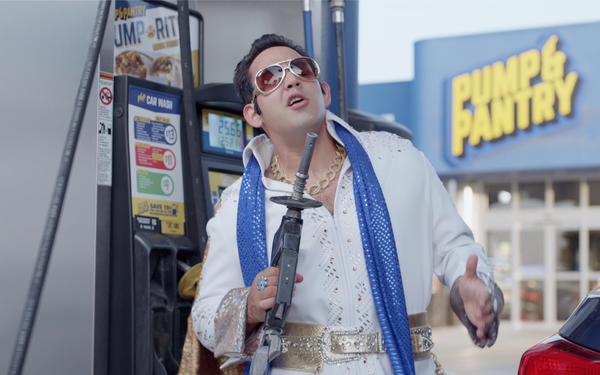 Midwest gas and convenience chain Pump & Pantry (P&P) is continuing its total brand revamp by introducing a campaign featuring an Elvis impersonator as one of its singing consumers.

The work, developed with Slugger Creative, encourages signups for the chain’s new loyalty program, Pumped Up Rewards, by showcasing a variety of customers singing “pump up my day” as they pump their gas. The spot ends with a sullen-looking hockey mom grimacing to ask “do I have to?” before the fake Elvis tells her no. The voiceover promotes the benefits of the program.

The 30-second commercial runs on local TV, while characters from the spot will appear in promotional banners inside the stores. “The jingle’s been out there for a year, so this was a way to leverage that equity in a fun, simple way,” said Brandon Beck, senior director of marketing at Bosselman Enterprises, parent of Pump & Pantry. “We explain all the particulars in other marketing materials, from the store to email and social media.”

Slugger plans to further build on the campaign over the spring and summer to celebrate P&P’s 50th anniversary.

“The setup is made for social media and the selfie generation,” says Andrew Ladden, CEO of Slugger Creative. “This makes it fun to be a P&P customer. And it can lead to people posting videos and ultimately auditioning to be in the next iterations of the campaign.”

P&P released the first phase of its makeover in 2019, after Beck and Ladden reignited their longstanding partnership. The pair had earlier rebranded the outdoor company Cabela’s a decade ago, when Beck led Cabela’s brand marketing and Ladden was an executive creative director at Ogilvy.

When Beck arrived at P&P parent company Bosselman in 2018, he called on Ladden, then CCO at Madras, for a radio jingle.
Then, the two worked to overhaul the chain’s look and feel, changing the palette from a traditional look developed in the 1980s to a blue and yellow that Ladden calls “a modern, tongue-in-cheek take on the old Fifties service center.”

P&P attributes this chainwide revamp to boosting sales in some locations by more than 50%. “The more we liven up our marketing, the more we see results,” adds Beck.