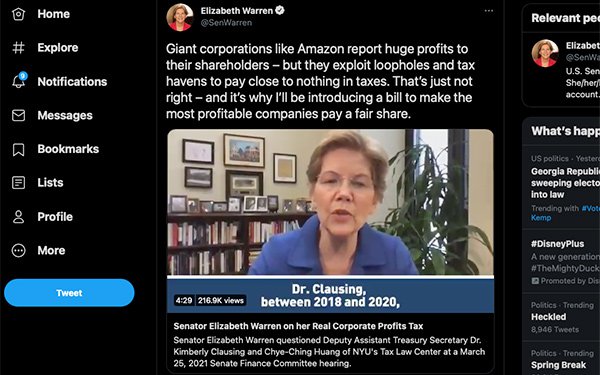 Warren said giant corporations are manipulating the tax code to avoid paying their fair share. In the coming weeks, she plans to introduce legislation to make a tax on book profits for the largest, most profitable corporations in the United States. It’s not clear whether this will raise the amount advertisers will pay to run ads on their platforms.

During her speech, Warren called out Amazon for its tax-paying practices. Her example centered on the corporate income tax rate of 21% between 2018 and 2020.

During that time, Amazon made more than $40 billion --  but it only paid about 4.5% in taxes, according to a study, cited by Deputy Assistant Treasury Secretary Kimberly Clausing, which pointed to a problem in “international profit-shifting.”

Amazon is not the only big corporation with such statistics. Other loopholes and tax shelters allow companies to pay less in taxes, and having losses in past years can reduce their tax liability.

Warren tweeted: “Giant corporations like Amazon report huge profits to their shareholders — but they exploit loopholes and tax havens to pay close to nothing in taxes. That’s just not right — and it’s why I’ll be introducing a bill to make the most profitable companies pay a fair share.”

Amazon fired back: “1/3 You make the tax laws @SenWarren; we just follow them. If you don’t like the laws you’ve created, by all means, change them. Here are the facts: Amazon has paid billions of dollars in corporate taxes over the past few years alone.”

Amazon also tweeted: “2/3 In 2020, we had another $1.7B in federal tax expense and that’s on top of the $18 billion we generated in sales taxes for states and localities in the U.S. Congress designed tax laws to encourage investment in the economy.”

Warren wants to raise the corporate tax rate and close loopholes. She proposed that the government apply a flat tax, for example -- 7% -- to more than 1,000 corporations that report more than $100 million in profits to ensure that big companies paid their fair share.

The problem is that when you “plug one loophole, they will bring in armies of lawyers, lobbyists and accountants to find another,” she said.

Warren’s proposal recommends aligning corporate taxable income to income reported for the purposes of investor’s reporting, according to Kevin Lee, founder of Didit.

“The alignment of those two numbers as driving media and advertising spending should not change advertising spend. The CEOs of public companies in particular, but also private, including PE/VC and others, are driven to report revenue and profit to the investment community that reflect the true results of the company,” he wrote in an email to Search & Performance Marketing Daily. “Lobbyists over the years have created scenarios where ‘Wall Street income/profit’ diverges dramatically from the profit used to calculate tax liability.”

All the “loopholes” were passed with particular business investment stimulus objectives in mind, including R&D tax credits and loss-carry-forward elements, he wrote.

"Some of that government subsidy resulted in more investment in marketing — the taxpayer was paying for tech companies like Amazon to spend on marketing," Lee explains. "Some economists like New York University professor Scott Galloway think the companies would still spend on growth, even without the government subsidies. I tend to agree."