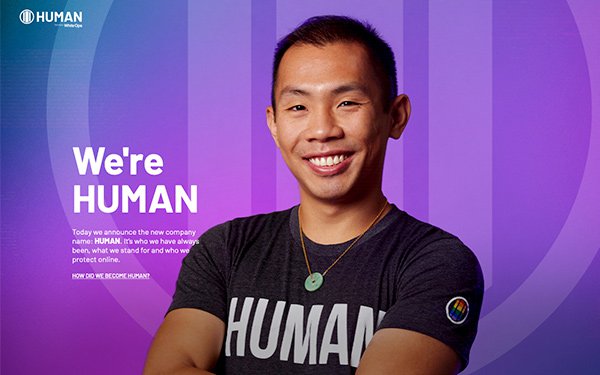 White Ops, known for its focus on protecting companies from bot attacks, has rebranded to HUMAN to “more authentically” represent its values. The announcement made Tuesday.

The company -- which is now owned by Goldman Sachs Merchant Banking Division, in partnership with ClearSky Security and NightDragon -- said the name reflects its strong commitment to equality and diversity.

It marks a renewed pledge to carry out the team’s long-held mission of protecting the integrity of the internet by disrupting the economics of cybercrime, according to Tamer Hassan, CEO and co-founder of WhiteOps, which has now been rebranded to HUMAN.

Hassan announced a change in the works last October. During the past six months, the brand team spoke to customers, partners, analysts, industry leaders, employees, family and friends, before deciding to make the change.

The company reviewed thousands of potential names, said Dan Lowden, CMO of HUMAN, adding that “we kept coming back to HUMAN, a theme we’ve embodied since 2014.”

As the new name suggests, the company plans to infuse “humanity” into the digital experience.

What does that mean? Lowden tells us that the company fights daily to “protect our customers' digital experiences.”

This new identity galvanizes the vision that defines the future of the cybersecurity market on the company’s terms, not the bots.

Bot attacks are impacting business in every corner of the internet, and are a much bigger problem than most companies realize.

WhiteOps' Human Verification Engine protects applications, APIs, and digital media from bot attacks, preventing losses and improving the digital experience for real humans. Knowing who is a real human is one of many complex issues across the internet.

HUMAN now verifies more than 10 trillion interactions per week, protecting many of the largest enterprises and internet platforms. In 2020, the company saw 34% growth in its customer base and 30% global growth across its teams.