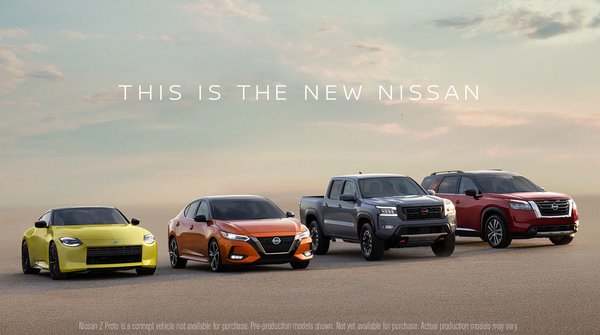 Nissan aims to show how it is bringing back the thrill of driving in a brand-wide campaign featuring the entire lineup of products, along with a prototype vehicle and a few vintage favorites.

A 60-second spot, “The New Nissan,” from TBWA\Chiat\Day, breaks during the NCAA Men’s Basketball Tournament this weekend, which Nissan is sponsoring.

The effort includes broadcast, digital and social media. It is “chapter one”  of a four-chapter series rolling out over the next year, says Allyson Witherspoon, vice president and chief marketing officer, Nissan U.S.

The first spot focuses on how the brand is revealing 10 new products in 20 months.

“We’ve been working over the last year on really trying to refine who we are and how we show up in the world as a brand,” Witherspoon tells Marketing Daily. “We’re in the middle of this huge product transformation and so we wanted to kind of go back in and look at our history.”

The spot opens with shots of Larson interspersed with some of Nissan’s iconic heritage vehicles (the 300 ZX and the 240Z). She laments that cars once played important roles in pop culture, but that the feeling has been lost in recent years.

“We have this incredible DNA, it’s 80 years old, and we wanted to honor that heritage and how it has inspired the ‘New Nissan,’ which is this brand transformation and product transformation,” she says.

The story takes a sudden turn to feature Larson driving spiritedly in a Z Proto, then off-roading in a Frontier, driving an all-electric Leaf and behind the wheel of a tech-packed Rogue. The spot ends with Larson driving away in the Nissan Ariya, followed by a wide shot displaying the new Nissan product portfolio.

The automaker has been working with Larson for more than a year, starting with the “Refuse to Compromise” campaign for the redesigned Sentra last March. She was elevated to brand ambassador in November.

Larson, whose involvement has been embraced by the brand’s dealers, “definitely brings the spirit of our message to life in this latest campaign,” Witherspoon says.